In 1984, Battery Point resident Helen Foster made a special request for her 21st birthday. She asked her father, master craftsman Bill Foster, to build her a clinker dinghy. Helen was concerned that traditional boatbuilding skills might be dying out and she wanted to observe the process from start to finish.

The design brief was clear for Bill. The boat was to be light enough to be carried by two people and had to move well through the water when rowed. In addition, it had to carry a load of up to four adults and handle well under sail one up.

Bill relished the challenge and created the first ‘Foster 10’. Launched in 1985 and named ‘Ellen’ after Bill’s mother, the boat is breathtakingly beautiful in proportion and detail. The planking is of King Billy pine with Huon pine trim; the transom is of Australian cedar salvaged from an International cadet dinghy and the knees are of casuarina. Before he began building the boat, Bill put an advertisement in the paper for ‘home grown knees’, which caused considerable puzzlement among the staff of the Mercury! According to Helen, the boat is wonderful to sail and looks as pretty as the day she was launched.

Bill Foster has played a key role in preserving Tasmania’s outstanding reputation for boat building. As a child, he remembers roaming through the Battery Point slipways where his love of wooden boats was hatched. At 14, he went to work for well-known Battery Point boat-builder Jock Muir where he learned his trade alongside a number of highly skilled, veteran shipwrights. He continued to work in the industry for many years before taking up an alternative career. Following his retirement, Bill became senior tutor and consultant for the Shipwrights Point School of Wooden Boat Building. Over the years, Bill has built and restored numerous magnificent boats, none more important than his work on the historic trading ketch May Queen, for which he received an OAM and an International Maritime award.

Using Bill Foster’s design, specialist boat builders have constructed about 35 Foster 10s that grace the waters throughout the state and overseas. Helen Foster’s son Rex has inherited the Foster family’s love of sailing. Rex looks forward to taking his mother out in the Foster 10 during the summer months, something that is certain to gladden the heart of his grandfather. 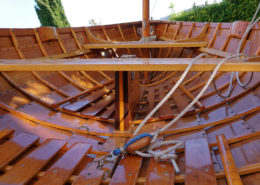 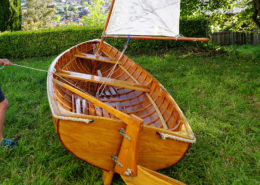 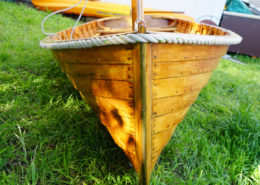 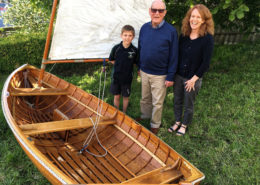 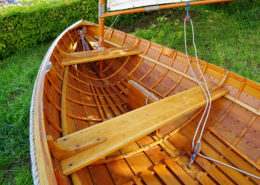 A vision in the front window
Scroll to top