Once upon a time there was a little apple tree

A long, long time ago in the year 2006 we lived in a cold and wet place in the hills above Hobart. It was a joyous place to live with an abundance of native trees and bushes and also some colourful introduced flora. In amongst the rhododendrons was a sickly young tree that tried to survive the weather and the onslaught of the gang of brush tail possums that would devour the new blossoms and then the young leaves. In the process they would snap the new growth and the tree never had a chance to produce fruit. Examining the blossoms and new leaves we were sure it was an apple tree of some sort but we never had a chance to see the end result.

This annual battle with the weather and the possums continued until the end of the year 2018AD when we sold the house and temporarily moved in with Gay’s sister in South Hobart. We took pity on the frail “apple tree” and transplanted it to a new home away from the cold and hungry possums into Gay’s sister’s back yard. It was given a prime position in a sunny spot and given lots of care and attention. It was very grateful and it burst into life with a beautiful display of apple blossoms and new growth and leaves. It produced an enormous crop of small apples on the new twigs so as to avoid damage to the new growth we removed about 90% of the tiny apples. We waited patiently to see what variety these new apples were growing into, only to discover they stayed small about the size of cherries and were a lovely red in colour. We now realised they were Crab Apples!

Moving forward one season and this time we did not thin the crop, and were rewarded with a bountiful and beautiful display of colourful crab apples. 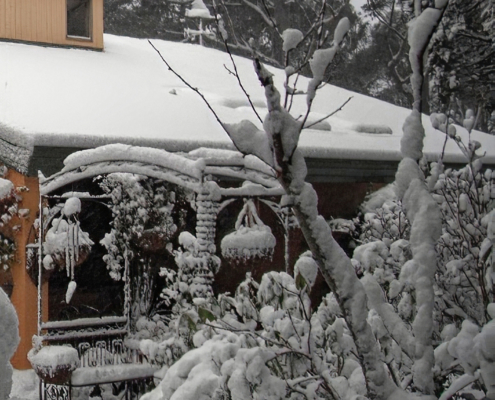 By now we were residents of historic Battery Point for 12 months and we found our movements restricted. To occupy our time for a few days it occurred to us that we could pick the crop of crab apples and make some Crab Apple Jelly.
This is where the story has the Battery Point connection because the following stages of jelly production happened right here.

The fruit was topped and tailed and put into a large saucepan and covered with water. It was brought to the boil and allowed to simmer until the fruit was soft and disintegrating.

The pulp was then put into a muslin cloth and drained overnight. The following day, sugar and lemon juice were added, and the liquid brought to the boil until a jelly was formed on a cold saucer. It was then poured into clean jars and the lids put on whilst hot.

While I was typing this exciting story my wife Gay created a poem to summarise her thoughts.

There was little apple tree
It lived up Fern Tree way
It never was allowed to flower
As animals there did it devour
The decision was to have it move
to somewhere where it found its groove
This year it bore a bountiful crop
But big fruit it certainly was not
Our lovely little apple tree
Was not a fuji, pink lady or delicious
But a crab apple, tiny but so nutritious
So red they were, and round and small
So we decided to take them all
And make some very yummy jelly
Which would taste so lovely in our belly
We topped and tailed and boiled ‘til mushy
Then strained, added sugar and lemon
To make it very lushy
We are happy we moved the little chappy
As now the crab apple tree is very happy
We hope next year it will bloom once more
With fruit again we can adore

PreviousNext
1234567
Back to Extraordinary Times
Reading to the twins

Too much time on their hands
Scroll to top