Memories of a Battery Point Boy

In this story, John Kenny tells of his experiences as a teenager living in Battery Point in the 1950s.

I have written in the first person, but I hope that readers see this as more than just a story about me. I hope it gives some idea about what life was like for young people in the early 1950s and about society generally at the time. I am 80 years old writing about things that happened nearly 70 years ago. Some of my memories may not be completely accurate and if you are able to correct any mistakes, please do so!

My father Jack had a beautiful Perce (Percy) Coverdale built clinker dinghy, which had gunwales and a base midship to which the inboard engine could be attached.

See these links for more information on Perce Coverdale: Australian Dictionary of Biography and Maritime Times of Tasmania [via eHive]

He had a shed on the side of Max Creese’s slip where all his gear was stored. The procedure was to get the oars from the shed and if the tide was out, you could get under the Royal Yacht Club sheds and then walk up past Purdon’s place and down to Taylor’s jetty where the dinghy was on davits. If the tide was in, you had to go up Creese’s lane to Napoleon Street then along to Taylor’s lane. The dinghy was lowered to the water and then rowed to Creese’s where there was a little beach along side his jetty. The gear was carried down to the boat and then the journey started.

Dad took John Dineley with him and many times they motored to the aptly named Crayfish Point.They set cray rings, which had to be pulled quickly to the surface so the crays did not get out. Sheep’s heads were used for bait tied across the tops of the rings and it was always my task to get the heads from MacMillan’s butchery. Each trip they caught large numbers of crays, which were cooked in the copper and then Dad would give most of them away. This was in the mid 1950s and a lot of people did not have a fridge let alone a freezer, so the crays had to be eaten soon after cooking.

As well as crayfishing, Dad was also into floundering at Short Beach. I cannot remember all the details but I know he had a float on which the battery sat, a light and a spear with several prongs and barbs at the end. He and a friend speared large numbers and next morning Dad would take most of them to a fish shop in Sandy Bay to earn a bit of pocket money.

I remember another way he managed to earn a bit more money. We had a pedigree female cocker spaniel named Tarna and he mated her with a pedigreed male. Dad worked as a bus and tram driver with the MTT as it was known then. As it happened, Dad was driving the Battery Point bus when Tarna went into labour. I had to stand on the verandah and hold up the appropriate number of fingers each time he went past to indicate how many pups had been born. I recall there were six, all of which were sold.

I did not go cray fishing as it took so long to get there but, more importantly, with the motor and all the gear there was really not enough room in a 12 foot dinghy for three people. What I did during the summer holidays was to get the dinghy, fix the motor and rudder and set off. I spent hours going around the wharves which were so busy, particularly with the apple ships. Occasionally, I would go the other way around Battery Point and Short Beach. There was something magical about being on the water and being close to the activity. Often I would stop the motor and simply sit there enjoying the sights and the sun. I was 15 and 16 in the two years I was doing this. For some reason I do not know what happened to this beautiful and historic dinghy. Perhaps someone who reads this might be able to shed some light.

I spent a lot of time down at the Battery Point slips as there was always something interesting going on. We lived in Colville Street so the slips were quite close. I remember often going down to Burnett’s jetty to get scallops when their fishing boat came in. We used to take an enamel milk container and I seem to remember that we paid sixpence for them but my memory might not be quite accurate.

The slips were important in my life again when I was invited to be a crew member on the cadet dinghy Triton helmed by Peter Woods, commonly known as Spanner. Peter Dobson, simply known as Dobbo, was on the main sheet and I was for’ard hand. 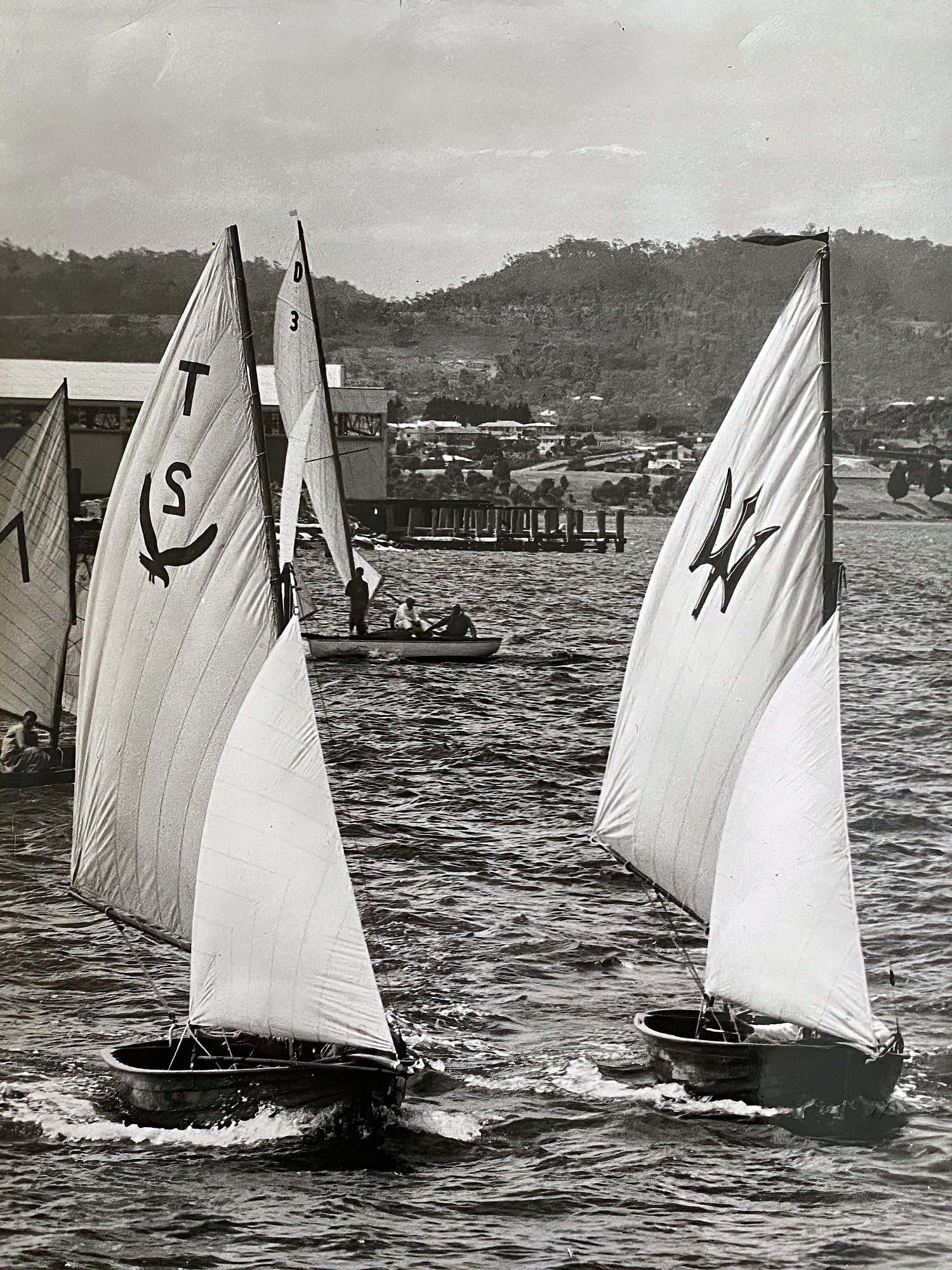 We enjoyed a great deal of success representing the State in the Stonehaven Cup twice, once in Hobart and then in Perth.

Battery Point in those days was nothing like the trendy place it is today. Most of the men were working class and many families rented their houses because they could not afford to buy them. There was, however, a great deal of friendship and people looked out for each other. I found it a great place to grow up as a youth, particularly with the slips and the river as my playgrounds. The other playground was Queenborough. When Sandy Bay were playing at home we would walk from home down Grassy Hill, along Marieville Esplanade and past the Rifle Range, as it was then, to the ground.Like a lot of people in Battery Point we did not have a car at that time.

The Sandy Bay Football Club had been established in 1945 and won its first premiership in 1946. In 1952 the Seagulls as they were known, led by Gordon Bowman, won the Premiership and I think half of Battery Point were at North Hobart oval that day. I remember around about 7.00 that night going down to the Shipwright’s Arms and sitting on a window ledge of the hotel, watching the comings and goings and listening to the riotous celebrations happening inside.

There has been talk recently of placing a deposit on bottles and cans. A form of this existed back in those days. Cordial bottles returned to the shop earned the returner threepence. I can still remember being at the football where someone was drinking a bottle of cordial and three or four kids watching every mouthful and asking, ‘Can I have the bottle when you have finished Mister or Missus?’ The same thing applied with beer bottles. I have an idea that if you returned a carton of 12 large empty beer bottles to the Brewery you were paid one shilling, which could be used to buy more beer and so the cycle continued. I do not think cans and stubbies existed in those days.

If I were fortunate enough to be given sixpence, I could go to Cooper’s shop across the road from our place and for that I could get an ice cream cone and a small bottle of cordial. Where that shop was is now an Art Gallery. A special treat was for Mum to give us some money on a Sunday afternoon and my sister Jane and I would go to Bahr’s Lolly Shop. The only problem was that there was such a wonderful array of lollies it was always difficult to make up our minds. I also remember the marvellous milkshakes from Warne’s Milk Bar on Sandy Bay Road.

I experienced a bit of sectarian bitterness as a young boy. I started school at St. Joseph’s, which was run by the Sisters of Charity and was where the Collegiate Junior School is now situated on the corner of Molle and Macquarie Streets. Walking to school, probably with Kelvin and Garth Cobern, we had to walk past Albuera Street school where we were subjected to taunts such as ‘Catholic dogs sitting on logs eating maggots out of frogs’. I honestly cannot remember what we said but I have no doubt we gave as good as we got. I should add it was really just banter and nowhere nearly as bad as it might sound in the telling.

The other significant event for our family at this time was to get our first car in 1951. It was a 1928 Chev 4 in absolutely magnificent condition. It did not have to be cranked to start it, but I remember something about having to advance the spark and I assume there was a manual choke. It was really roomy and my sister Jane and I could sit in the back seat and our legs would not touch the front seat. Having a car meant many new experiences such as going to beaches such as Seven Mile or Marion Bay for the day.

Looking back I realise in many ways how lucky I was to grow up in Battery Point. People looked out for each other and if help or support was needed it was readily given. I think of some of the families who lived near us. Jock Muir lived in St George’s Terrace. His sons John, Ross and Greg were friends of mine and his daughter Lyn was a friend of Jane. Just along from their place was the home of Mr. Shepherd the plumber and his sons Tony and Barry who were mates of mine. Jock Muir’s brother Don lived a little way down Colville Street and near him Mr. Edwards and his sons who were shipping agents. The Briggs lived across the road from us and their son Grahame was heavily involved in amateur athletics as an official for many years. Bill and John Dobbie lived in Napoleon Street in what seemed like a mansion to me. There are many other families I could mention and perhaps some people reading this could add names of their families who lived on the Point.

I should mention in closing that there was a police station in DeWitt street where a house named Connage now stands. Sergeant Yost was in charge of the station and it was during his time when I was a 10 year old that I had my first and only brush with the law. Perhaps that is a story for telling at another time!