This story was written by Hobart resident Steven Figg, whose great-great-great grandmother lived in Arthur Circus from late 1850 to 1857.

The history of Arthur Circus, Battery Point with its unique collection of 16 single-storey Georgian brick cottages arranged in an irregular manner about a central village green has been well documented.

We know that Arthur Circus was subdivided by the early 1840s, as is evident on Sprent’s survey of Hobart Town. Its 16 allotments were first offered for sale on 8 March 1847 by Lieutenant Governor George Arthur, who acquired the land in 1829 in somewhat dubious circumstances. And by the time the Hobart Valuation Roll was published in The Hobart Town Gazette on 28 March 1853, we know that 14 of the 16 cottages that currently grace the Circus had been built.

Initially Arthur Circus was a closed loop only accessed from Hampden Road. Fortunately, wealthy Hobart Town resident Askin Morrison purchased block of land measuring two acres, two roods and 28 perches at Arthur Circus on 6 November 1847, which included ‘a right of road or way’ for ‘horses, carts and wagons and other carriages’. This gave the early residents of the Circus much easier access to the New Wharf area. The right of way became known as Runnymede Street, today’s official street name for the Circus.

In the early twentieth century Runnymede Street was pushed through the centre of the Circus, which for many years had been used by local residents as a recreation ground. The Circus became part of Runnymede Street in 1939, and its current street numbering was established. The Circus was restored to its original state by 1951, with traffic again directed around a central green.

William Figg moved to Victoria on 5 April 1843, never to return to Tasmania. Margaret lived with her children at several different Hobart Town properties during the 1840s, but by the time her fifth grandchild Margaret Taylor was born on 21 September 1851, she lived at Battery Point. And by 28 March 1853 Margaret lived at 13 Arthur Circus in a new cottage owned by her strong, intelligent sister Catherine Jackson.

So how did Margaret’s sister Catherine Jackson acquire her Circus cottage? We know that Edward Brown, Hobart Town bricklayer and his partner Thomas Collins, Hobart Town plasterer purchased the advertised ‘Lot 6’ block at Arthur Circus from George Arthur on 15 October 1847. Brown and Collins erected a two-roomed brick cottage and outbuildings on part of this land, almost certainly in 1848 or 1849.

It is almost certain that the wealthy, twice-widowed Catherine made her new Arthur Circus cottage available to her struggling older sister Margaret at this time. And there is little doubt that sisterly gratitude played some role in Margaret’s short walk to nearby St George’s Anglican Church on 6 December 1853 to celebrate Catherine’s third marriage to recently widowed Hobart Town lawyer and architect James Thomson. 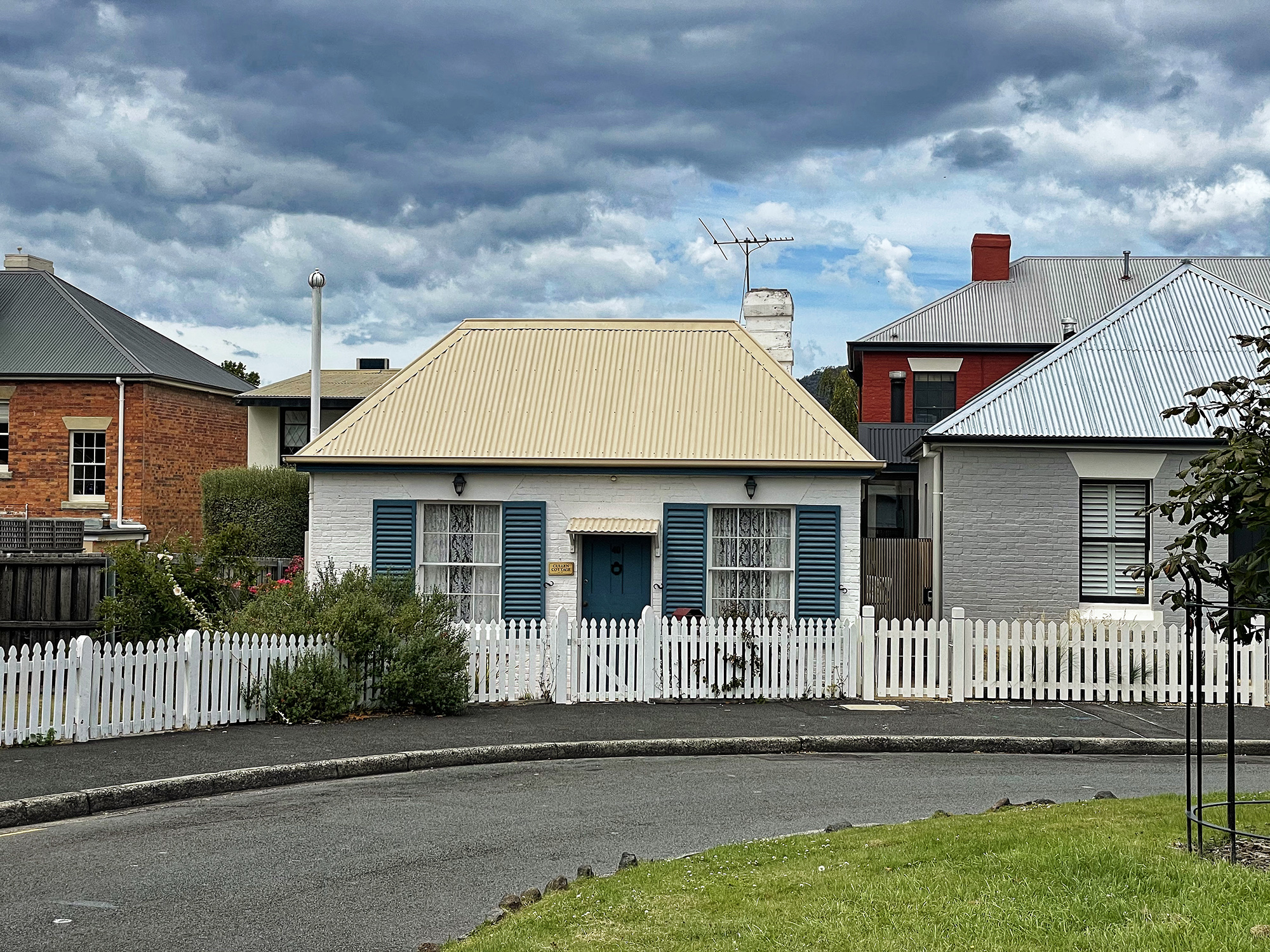 Margaret lived at 13 Arthur Circus from the second half of 1850 until her death in 1857. We know that Margaret’s eldest son William Figg lived with his mother during much of this time. Sadly, Margaret’s second daughter Jane Taylor was just 24 years old and a mother of three when she died on 9 March 1854 at her mother’s residence. It was a tragic year for Margaret, as her elderly father Robert Smith also died on 30 January that year at his residence at 65 Bathurst Street, Hobart Town. Margaret’s youngest daughter Ann Figg also lived with her mother at the Circus before her marriage to John Moore on 17 October 1854 at St George’s Anglican Church. For a year after their marriage, Ann and John Moore lived next door to Margaret at 14 Arthur Circus, where Margaret’s eighth grandchild Henry was born on 21 April 1855. Henry Figg, my great-great grandfather may also have lived with his mother at the Circus for a period of time after his return from Adelaide in the mid 1850s.

And so, Margaret Figg enjoyed her twilight years with her extended family in the infant years of Australia’s only extant circular street. Margaret who was commonly referred to as Mrs. Figg in Hobart Town newspapers was undoubtedly one of the elderly matriarchs at the Circus during the 1850s. It is not difficult to imagine Margaret spending her days at the Circus, sharing her grandmotherly wisdom with her family and friends.

Margaret Figg passed away from general decline at her 13 Arthur Circus residence just two days before Christmas Day in 1857. She was about 61 years old. Margaret was buried at 10.00am on Christmas Day at St Andrew’s Presbyterian Church Cemetery, Hobart; no doubt she organised an early funeral to enable her many mourners to get home in time for Christmas lunch.

Margaret’s cottage at 13 Arthur Circus, Battery Point continued to be owned by her sister Catherine Thomson until her death on 4 October 1871 at Hobart. Catherine bequeathed the cottage property and another block of land at Arthur Circus to her youngest sister Christina Morrisby nee Smith who in turn transferred the cottage to her son Henry Morrisby during the period 1872-1874. Thomas Cullen, shipbuilder and licensee of McLaren’s Hotel at Collins Street, Hobart acquired the cottage from Henry Morrisby in 1875 and owned it for more than twenty years, even after his return to his native Scotland in the early 1880s. Thomas Cullen died in 1897 at Glasgow, Scotland. By this time the original Circus numbering had changed; Margaret’s cottage was now situated at 12 Arthur Circus. 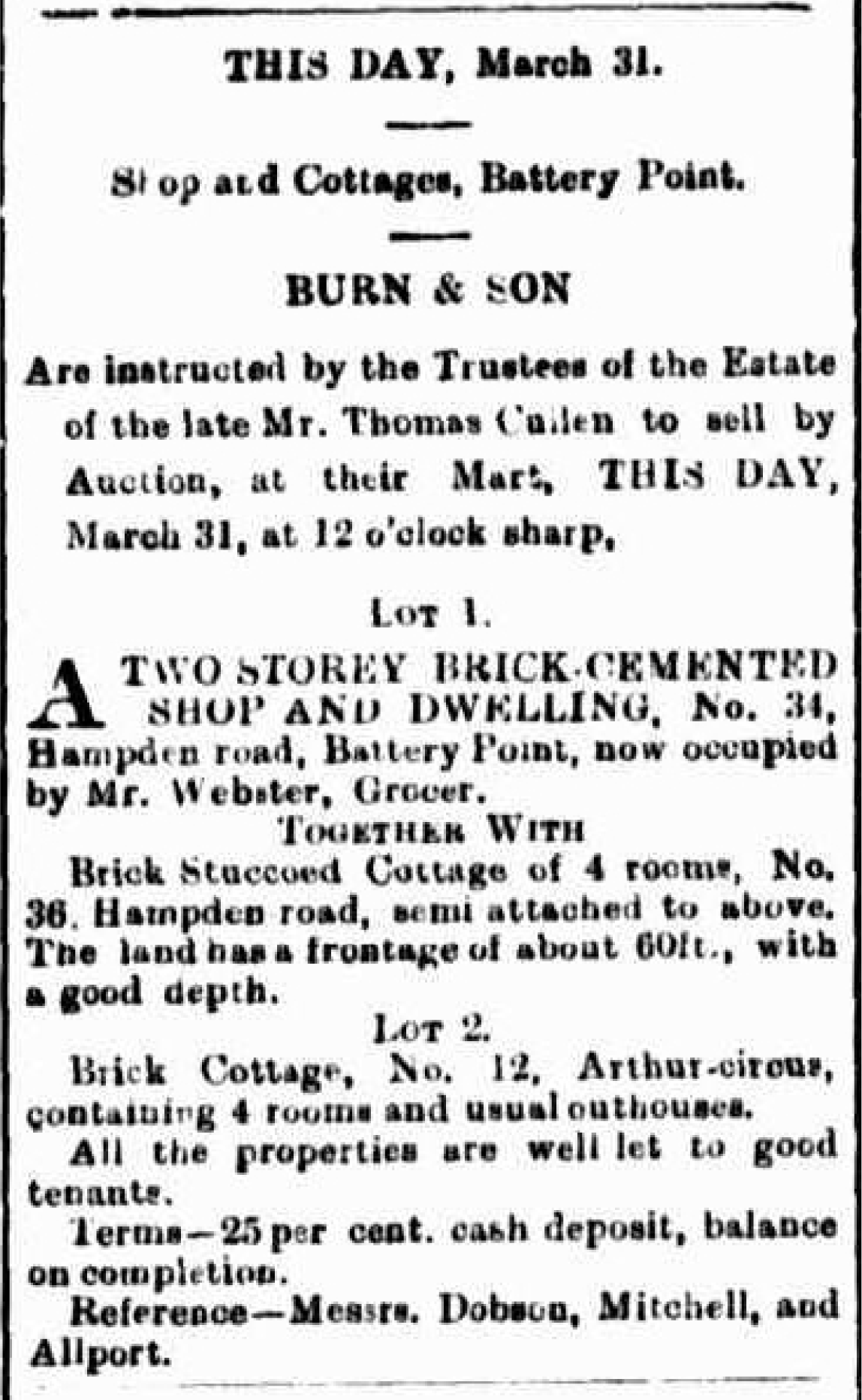 The trustees of the estate of the absentee landlord, the late Mr. Thomas Cullen offered the four-roomed cottage, ‘well let to good tenants’ for sale on 31 March 1898.

Margaret Figg’s heritage-listed cottage is located at 40 Runnymede Street, Battery Point and is currently known as Cullen Cottage. More than 163 years have passed since my great-great-great grandmother lived there. But as I look out from my abode on Horatio’s Hill towards that sentinel tower of St George’s Church standing tall over historic Battery Point, I can’t help but think that, at least on the grounds of original occupancy, Cullen Cottage would be better known as Figg Cottage.