It has been my long standing practice to go to the supermarket most days. That way I could walk there and back without the need to struggle up the hill burdened in the manner of a 19th century gold miner’s mule.

However, in these different times, this is no longer recommended. Instead, one should limit the number of visits, necessitating some not unwelcome but improbable changes to the state of my arm muscles or waking my elderly car from its well deserved rest.

It is also before we learnt to social distance through dance.

But before we explore how COVID-19 has seen the reappearance of Terpsichore, the ancient Greek Muse of Dance, especially in the fruit and veg aisle, I first need to explain my difficult relationship with supermarkets.

I find them strange and mysterious places.

To illustrate, let me recount a typical visit from more conventional times. 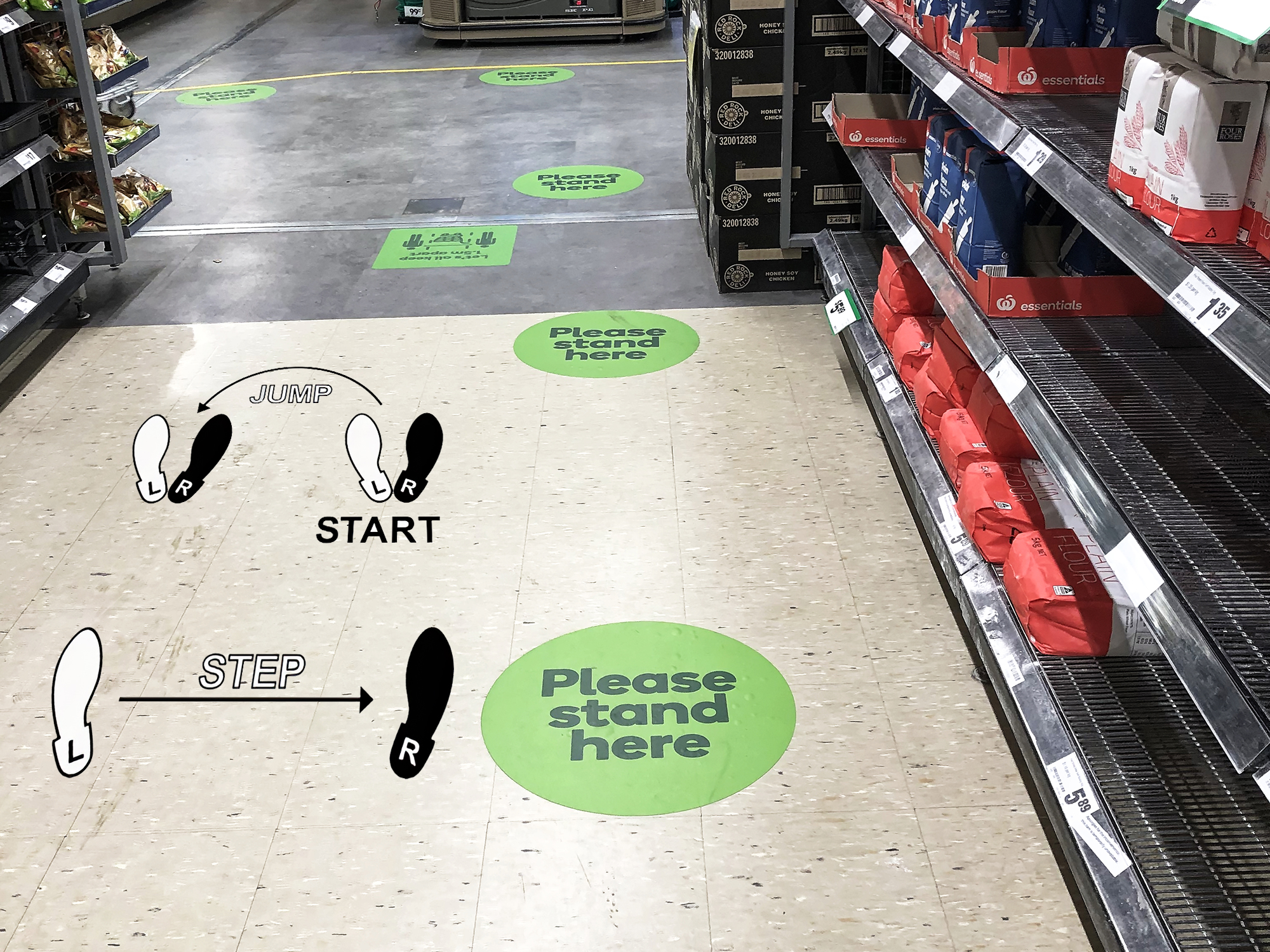 I was in the supermarket in order to purchase, amongst other staples, some peanuts. A worthy aim if I say so myself as I quite like nuts, especially the delicious, but vaguely guilt-ridden, salted variety.

I was wandering, as one does, from aisle to aisle in no particular order other than a vague memory that the hand squeezed anchovies are to be found in close proximity to the macroscopic muesli, which, of course, turns out rarely to be the case.

Why, you might ask, do you eschew the product guide helpfully found at the end of every aisle, except, of course, the one in which your find yourself?

Well, from time to time, I have taken advantage of this publication, often in search of a product the memory of which slowly diminishes the closer one gets to the laminated sheet. After a trek reminiscent of King Solomon’s Mines to find the aforesaid guide (I’m Stewart Granger of course or possibly Deborah Kerr, I get confused), it always reveals to me that sauce can be found in aisle 3.

Now, I rarely need to buy sauce of any form but, having been presented with a target aisle, who am I to argue. There is a Dirk Gently-like need to follow along. Of course, finding aisle 3 is no mean feat in itself. You need to wheel a supermarket trolley (a contradiction in terms that can drive even the most equanimous shopper to mutter dark exhortations about unspeakable acts such as putting a pack of biscuits back on the wrong shelf – take that supermarket designers) while craning your neck to read the aisle signs carefully located so they can only be seen once you are actually in the aisle. This does rather leave behind a trail of frightened children, overturned elders and scattered staff.

And don’t tell me about the apps that offer to reveal to you the location of even the most elusive item, usually long life milk for some unknown reason. The supermarkets I frequent are all built in basement bunkers that could be used to detect neutrinos if there weren’t so many bananas littered around. The chance of an internet connection is so remote that marauding legions of the Facebook deprived have become quite a pest in the dairy section.

Nevertheless, unless distracted by the person who believes that shouting loudly over the public address system about vegetables will cause people to wake from the stupor that descends on all in a supermarket on a Wednesday afternoon (and, in supermarkets, any time is a Wednesday afternoon, just with bigger queues), I did finally arrive in aisle 3.

I was then faced with the need to locate the sought after sauce in shelving that continues so far into the distance that it reaches the vanishing point.

I have noticed that there are two competing techniques used by shoppers to find their elusive liquid condiment or, indeed, any product. The first is to cruise at a good speed up the aisle looking frantically to the left and right and inevitably, on reaching the end without success, to loop around the next aisle in the vain hope that other shoppers won’t see the shame of failure. And let there be no doubt, supermarket shoppers can be a judgemental bunch, always happy to divert attention away from their own trolley full of things that no sensible person would ever consume and they had no intention of buying.

The other technique, and the one I favour, is to stop at strategic points along said aisle and stare meaningfully at the shelves. This often involves some shunting back and forth as a stream of similarly confused shoppers attempt to pass in aisles carefully constructed to be one and a half trolleys wide. Staring at the shelves rarely reveals the location of the elusive sauce but it does, at least, allow for the passage of time to ease the strange urge to purchase it. Of course, you are then left staring at shelves with no remaining purpose but, at least, your trolley is thankfully sauce free.

Waking from this stupor often allows you to stride off with renewed purpose or, more accurately, to wobble away. Of course, you still have no idea what it is you are looking for or where to find it but, by jove, you are doing it with determination and verve.

Which leads me neatly, if somewhat circuitously, to the central aim of my quest. I had, quite accidentally, arrived at the shelf full of every type of deliciously salty nut or other treat made from flour or seaweed or whatever it is that they use to make Bhuja mix other than an unnecessary amount of chilli powder. In a moment of distraction caused by the passage of someone who looked like they knew what they were shopping for but really didn’t, I reached for a pack of peanuts. Good old Nobby’s nuts sealed in foil for my future enjoyment.

Bursting with pride in my achievement, I proceeded to the checkout and paid an extraordinary amount of money for items that I had no memory of placing in my trolley and no clue as to how they were to be used.

When I arrived home, I then went through the ritual of unpacking. You know the one. You reach into the shopping bag in search of the garlic only to find that you have actually purchased cheese pods. I’m not actually certain what a cheese pod is because I have never been brave enough to eat one but I do know that they are not a reasonable substitute for garlic. Anyway, I finally came to the peanuts. Now here was something I did need to buy, a justification for the whole sordid business of the supermarket shopping expedition.

Feeling uplifted I looked fondly at the pack of peanuts. Vindication you might assume. But no, the supermarket had one last spear to drive into my brain. The moment of distraction I mentioned had provided the shelving units enough time to warp spacetime and thus the location of what I had been reaching for. Instead of pain old peanuts, I had purchased a pack of satay peanuts.

Now what in the devil is a satay peanut? Isn’t satay made from peanuts? Does that mean I have bought a packet of peanut peanuts and, if so, how are they different from the peanut kind of peanuts?

I was defeated.  I decided that no longer would I persist with futile gestures like having a list or remembering what it is I required. The supermarket had won. If it can conspire to have me purchase peanut flavoured peanuts then all that was left was to place myself entirely at its mercy.

But we now come to our current circumstances. In these strange new times, my wife no longer indulges my zen-like approach to supermarket shopping. Instead, visits must be planned with military precision and kept to a minimum. Lists must be assembled. Reusable bags kept at hand. In the pantry, products for which there is no discernible use are to be avoided, nay, ruthlessly eliminated. I have to step up, shape up and shake out my woolly ways.

So, has COVID-19 slayed the supermarket beast that has so haunted me over the years?

Well, I can say that aimless wandering has been replaced by a new dance craze – ‘doing the supermarket shuffle’.

I’m certain you are all well versed in this new fancy, one worthy of putting on Facebook or Snapchat or whatever is the current social media platform du jour, except that it doesn’t involve cats. Or, at least, I haven’t seen any but as any rational person would accept, the essence of science is embracing credible doubt. Now before you wonder how credible dancing cats in supermarkets might actually be, I did once see a woman doing her shopping with her pet rat climbing in and out of her blouse.

As we are being responsible in our social distancing, I have noted myself and others doing the aforementioned supermarket shuffle. As you walk past the persimmons you take a jump to the left then, at the apples, a step to the right. You put you hands on your hips as you wait at a suitable distance while the person in front dawdles at the potatoes. In the aisles, you do a little time slip, avoiding a mind flip as someone stops suddenly in the middle of the aisle as they contemplate the relative merit of yoghurt or fromage.

We sashay this way and that until, exhausted and feeling as if we have been dancing with the stars, a show of which I have no knowledge but, I am assured by reliable sources, involves a similar amount of leaping around, we reach the checkout. There the supermarket shuffle ends as we queue in an orderly and well measured manner reminiscent of more normal times, but without someone bumping you in the back with their basket in the misguided belief that bruising the person ahead will make the line move more quickly.

So, while social distancing is challenging in so many ways, it has introduced dance to the supermarket experience. It has brought discipline to my shopping method. It has made queuing surprisingly less stressful. One can even say that it has returned, if not kindness, then at least civility to our local Woolies expeditions.

So, let us be thankful for small things and resolve that, when we emerge from our current hibernation and return to normal, we shall continue to dance while we shop.

Contributed by a Rocky Horror fan