Coming home: Battery Point in the time of Coronavirus

It is five-twenty in the morning. Dark. A lone streetlight struggles to illuminate the night. Wind whips cold rain against the windows and autumn leaves dance in mad circles in the yard. Inside it is warm; calm. It is the fiftieth day of lockdown; fifty days since I left Indonesia with my family to sit out the pandemic in far-away Tasmania. This is Battery Point in the time of corona.

Seven years have passed since I bought the little bluestone house at 64 Hampden Road known as Fusilier Cottage, but I have not properly lived in it until now. In that time, it has served as an art gallery and antique shop. Once or twice we camped here over summer breaks. Since April last year, it has been a building site. While I ran an education development project in Indonesia, my brother refurbished the old cottage and built an architect-designed extension at the rear and into the back of the garden. The work is now complete, Annick’s Antiques is now back in business in the front rooms, and I am no stranger to Battery Point.

Hobart born-and-bred, I lived in Albuera Street in the early Sixties. As a little boy, I was occasionally babysat by Dorothea Henslowe in her Battery Point home. Miss Henslowe was a good friend of my grandmother’s. I attended Albuera St Primary School before moving to Princes Street and then Hutchins – eventually completing Batchelor’s, Master’s and Doctoral degrees at the University of Tasmania. As an undergraduate student I lived for a while in Crelin Street, at the top of Billy Goat Lane. While there, I played in a folk band at St Ives Hotel (we were paid in beer in those days), having cut my teeth as a singer-songwriter in the Sunday night sessions at 63 Salamanca Place. Mummy’s Coffee Shop, in Waterloo Crescent, was another favourite haunt – a place to hang out, play guitars and drink hot chocolate.

Going back a little further in time, my great-great grandfather, Josias Heyward, arrived in Hobart on the Ann from London in 1833. Josias owned the windmill opposite St George’s church from 1866 to 1878. By this time, the mill, a landmark and a beacon for ships seeking shelter from the Southern Ocean, was falling into disrepair; a victim of progress; overtaken by steam technology. It was demolished in 1883. In 1874, the Tasmanian Tribune published a series of letters, purportedly penned by the mill itself, complaining of neglect. The windmill was built in 1836, thirty-two years after Collins rowed ashore with his Chaplain, Bobby Knopwood, and the British settlement in Sullivan’s Cove began. In 1838, two years after the windmill was built, St George’s was consecrated, Bobby Knopwood died, and Angus McLeod built his cottage on Hampden Road. The cottage was constructed from bluestone quarried at the bottom of the hill and edged with local sandstone. (Strictly speaking, the local ‘bluestone’ is dolorite, although Charles Darwin called it ‘greenstone’ when he visited Hobart in 1836.) 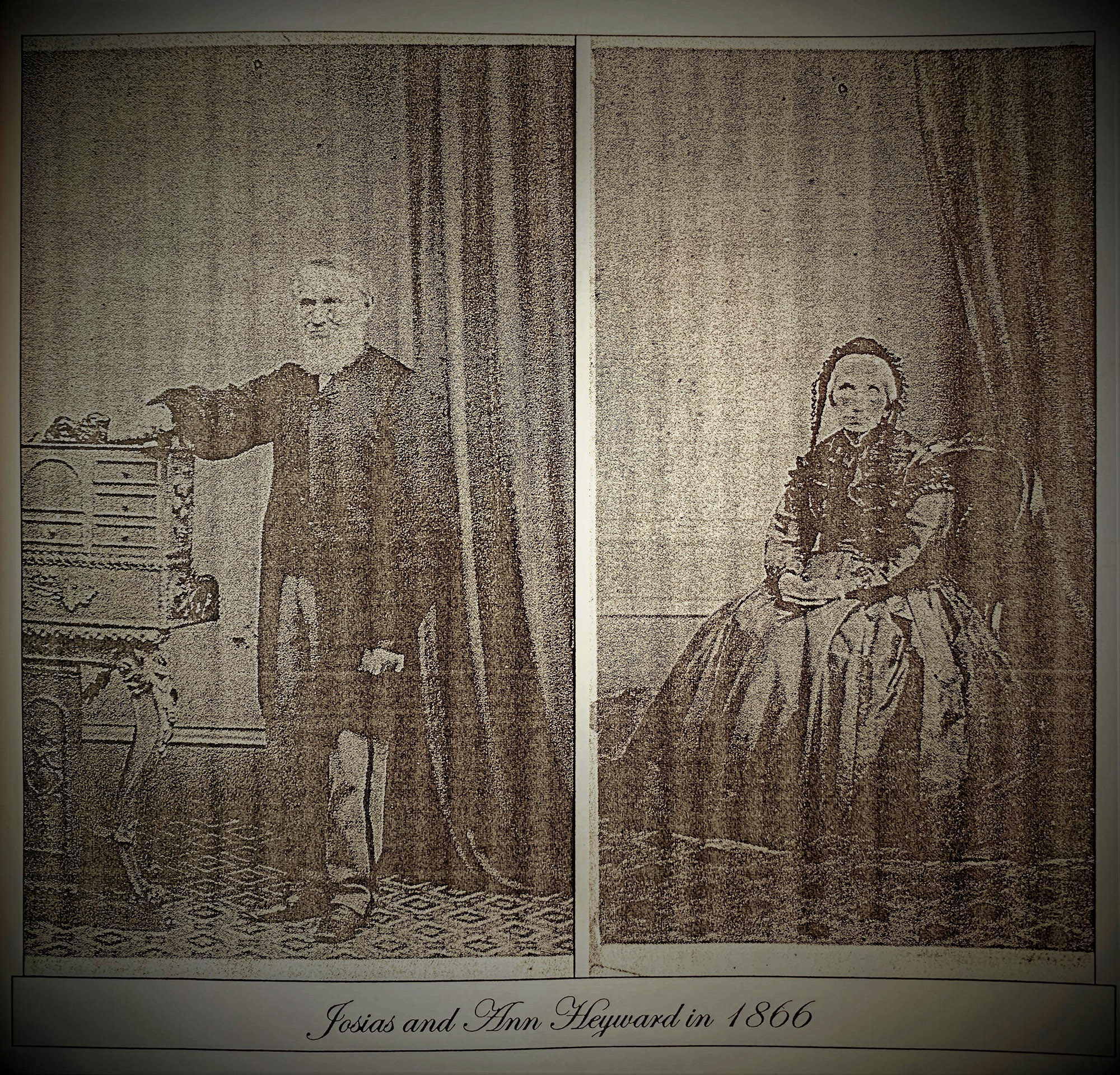 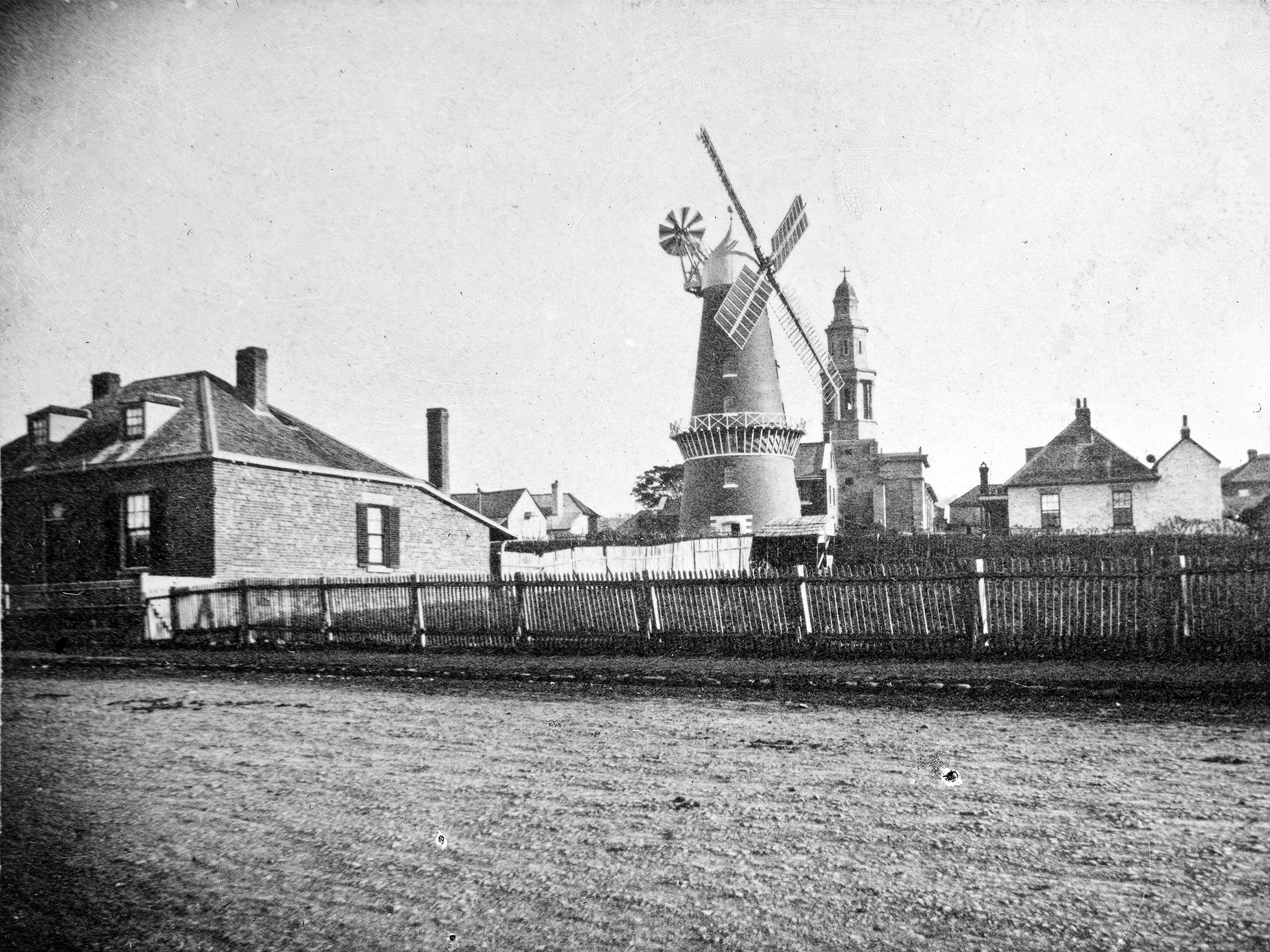 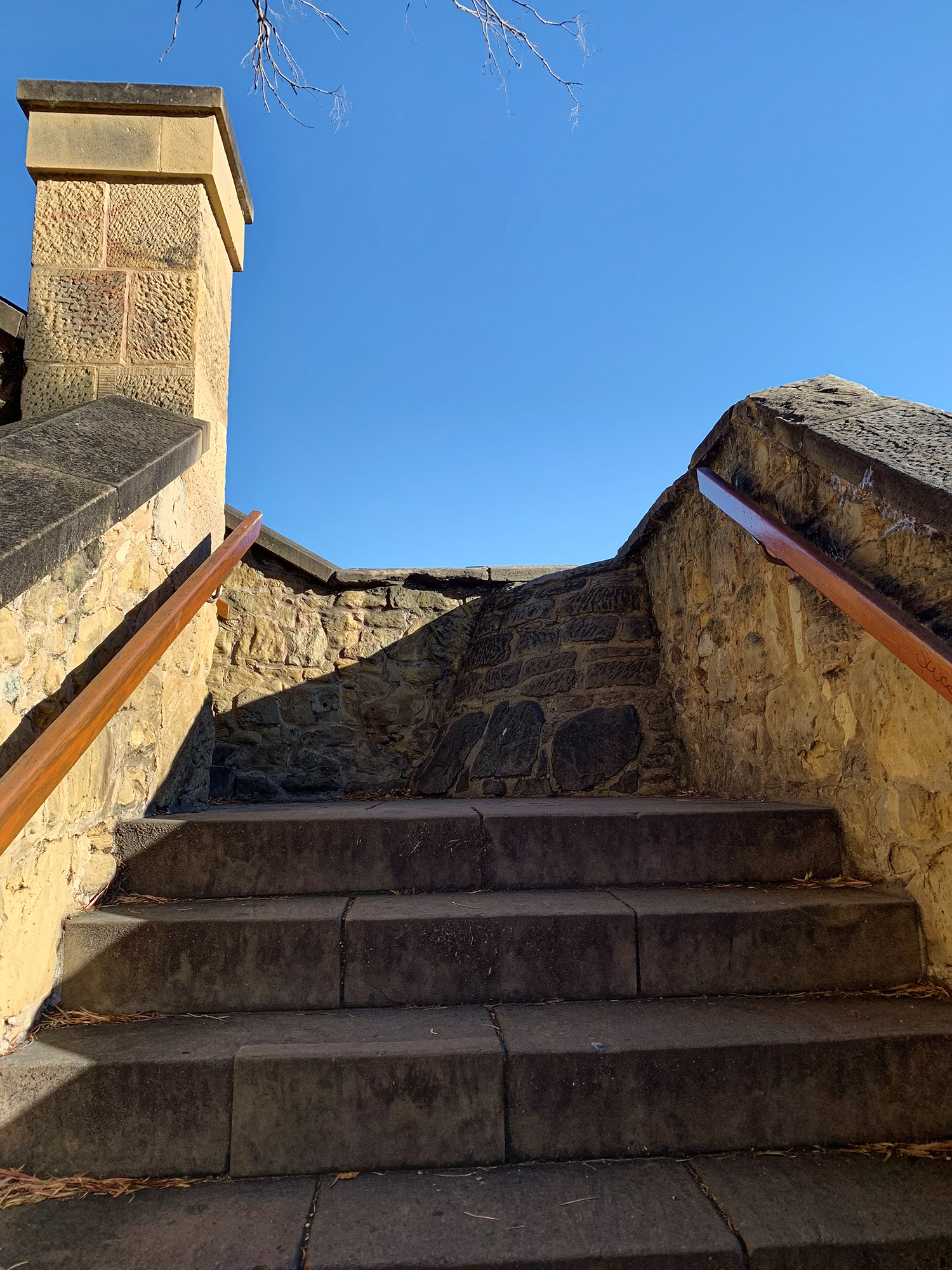 Kelly’s Steps were built near the quarry the following year, in 1839, and Kelly Street was named in 1840, by which time several cottages were already established. Hampden Road led across what is now Princes Park to the battery at the point, giving access to Secheron House, the port officer’s house and the signal station along the way – and ending at the rear of the ordinance building, at the eastern end of the new wharf, which is now known as Salamanca Place. Hampden Road had been there in some form for about ten years, and several cottages had been built. But Battery Point was still a wooded hill. As Amy Roundtree records in her marvellous book, Battery Point Today and Yesterday (1951):

‘Roads wander away to strange places. Does “Hampden Road” call up a picture of a rough thoroughfare leading down the hill from the Barracks, wandering along the top of the Knopwood’s farm, fringed with trees, boulders and wild flowers on its south-western side and fading out into scrub as it neared Mulgrave Battery? Even in the fifties and sixties children picked wild flowers among the boulders of “St George’s Hill” where St. George’s Terrace and Bath Street were built later.’

I have loved the little cottage on the corner of Hampden Road and Waterloo Crescent since I was a boy. Angus McLeod, who arrived in 1833, the same year as my great-great grandfather, was bandmaster of the 21st Royal Scots Fusiliers Regiment (known as the ‘North British’ regiment, to the English aristocracy). He would have had a fine view from his cottage, to the east down Hampden Road across the battery and the harbour; to the north across Sullivan’s Cove to the government paddock (now the Domain) and Gunners Quoin in the distance; and to the west to Anglesea Barracks and Mount Wellington behind. To the south he would have looked up the hill to the windmill. Angus retired in 1839 and lived in the cottage for a couple of years, where he plied his trade as a musician and music teacher before leaving Battery Point with his family in 1842. McLeod advertised in the Hobart Town Courier:

Music Tuition: Mr McLeod, 25 years Master of the Band of the 21st Royal Scotch Fusiliers, having settled here on the departure of the Regiment for India, respectfully informs his Friends and the public that he teaches and tunes the Piano Forte, Likewise teaches the Violin, Flute, Clarionet, Flageolet, Kent Bugle, and all other Wind Instruments. March 1st 1839

Quadrille Parties: Mr McLeod, late Bandmaster 21st Fusiliers, begs leave to acquaint the gentry of Hobart Town and its vicinity, that he has succeeded in forming an efficient Quadrille Band, from which parties can be accommodated with any number up to a complete band, and he having the best collection of music, (new and old for the purpose) in the colony, he feels confident that he will be able to give every satisfaction. All orders addressed to Fusileer Cottage, Battery Point, Mr. McGregor, 45, or Mr. Tegg, 39½ Elizabeth Street, will be punctually attended to. February 4th 1840 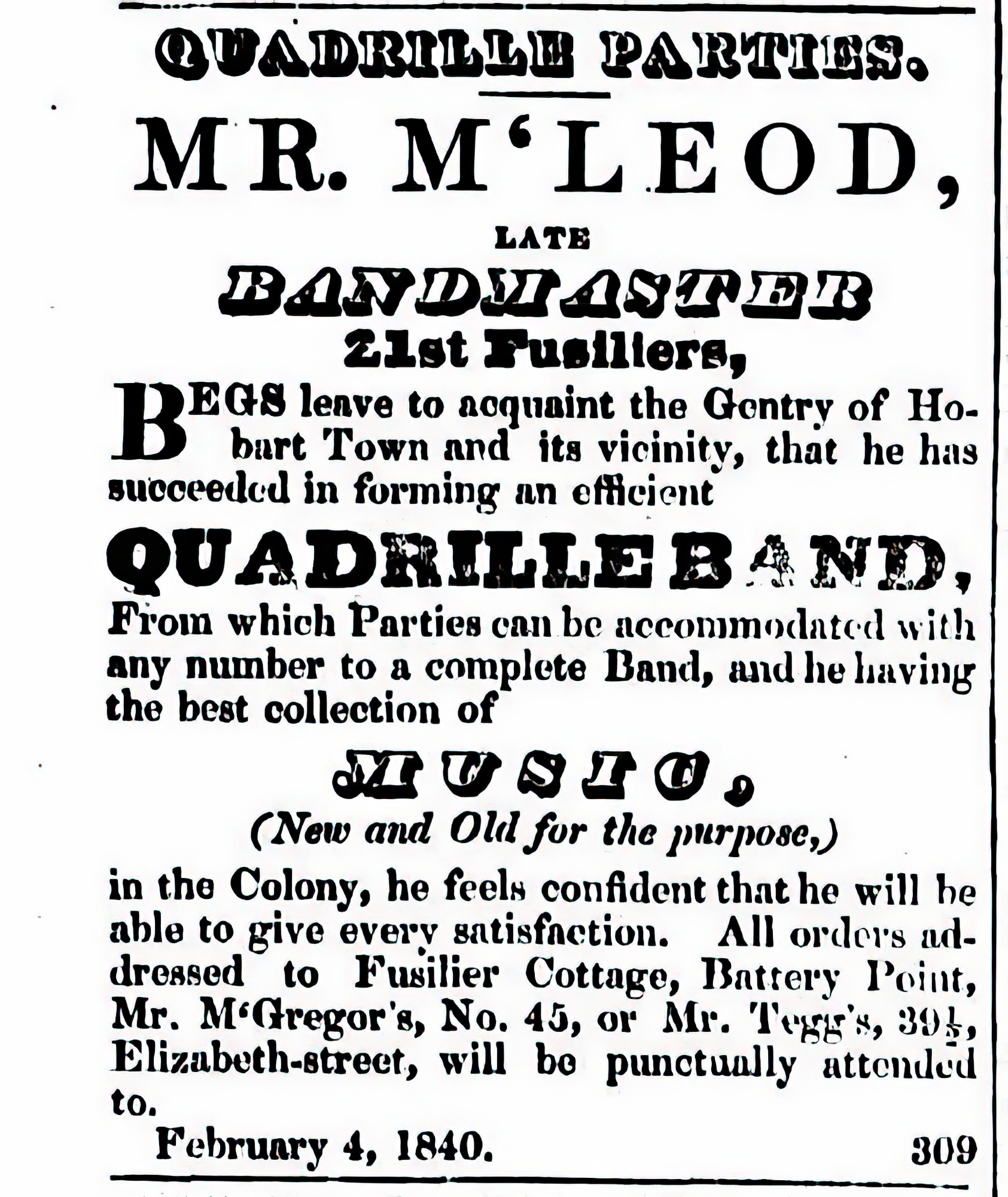 After Angus left in 1842 to take up a post as Superintendent of the Jericho Probation Station, the house was used as a family residence for many years. In 1871, it sold for 570 pounds. One family, the Eyles, lived in the cottage from just after the first world war until well after the second world war. I knew it in 1973 as the office of the Royal College of General Practitioners, where my girlfriend got her first job as a typist and operated the telex machine. That same year, an application to pave the garden for use as a carpark was rejected by the Council. There was a plan to turn this section of Hampden Road into a pedestrian mall. The following year, however, approval was given to remove an interior wall, fireplaces and chimney. The cottage became a family planning clinic. Forty years later, I acquired it from Pam Corkhill, who had been running a real-estate agency there for ten years.

When we moved in, after self-quarantining at an Opossum Bay shack for three weeks, it was early April and the cottage was still a building site. The garden was bald – a pile of loam and bare dirt screened from the street. We had saved as much as we could from the old garden, which, while much admired, was ready for a freshen-up. Hobart and Battery Point were locked down by the pandemic. The pub across the road was barred shut. The shops closed. We stood on our stoop with a candle and observed the ANZAC Day dawn service, looking down Kelly Street to the cenotaph in an eerie silence. And the streets were empty – except for people walking their dogs and taking the opportunity to chat at a distance in the afternoons. It all seemed quite unreal. But we felt immediately at home.

Fusilier Cottage is iconic, and, while it is now my property, in a sense, I hold it in trust for the wider community, for the future; a little piece of Tasmania’s heritage. And the good folk of Battery Point obviously feel the same way; everyone stops for a chat, everyone peers in to see what we are doing with the old place, with the cottage and garden, everyone has an opinion.

Four years ago, we commissioned local architects, Bence-Mulcahy, to design the extension. We engaged my brother’s firm, Thylacine Constructions, to build it, and my daughter-in-law’s Fairy Wrens to do the garden. Like McLeod, we wanted to combine business and family under the one roof. We wanted to be able to rent out the front rooms commercially and use the residence at the rear for a home-cum-holiday-rental, with facility for small events in the garden and living space. We wanted to be able to divide our time between our two island homes; Lombok and Tasmania. But most of all we wanted to honour the history while creating a modern space for living. The project involved repairing the existing cottage, creating office/retail space, visitor accommodation, and a new extension for the family living area. As the architect, Shamus Mulcahy, says:

‘…the bluestone and sandstone cottage is full of Georgian charm, and its generous garden which opens to the street makes it a popular local landmark. The extension supports these unique characteristics: the new building is set within the garden, is smaller in scale than the cottage, has a flat roof, and is positioned so that views of the cottage from Hampden Road and Waterloo Crescent are protected.’

The facade of the new extension is designed to give the occupants opportunities both to remain private and to open the home to bustling Battery Point. Glass doors and timber screens can be used in various combinations to change how the cottage interacts with the street and garden. The use of finely detailed Tasmanian timbers, bluestone flooring and a sensitive colour palette complement the Fusilier Cottage’s original bluestone. Our new screens are made from Tasmanian hardwood sourced from the bottom of Lake Murchison on the west coast. The refurbished garden is a contemporary cottage-garden style.

Eventually we will return to Indonesia, to pick up our lives and our work there. When we do so, we plan to rent our home out for short stays. So, like Angus McLeod, we have created a home and a business. But we won’t be away for long.

As the final finishing touches were made, and the building project was completed, the garden filled with autumn leaves, the weather grew crisp and the days grew short. The turning of Tasmania’s seasons is something I have missed during my time in Indonesia. Now, after six months, we are still here. Covid is running wild across the world – but in Battery Point the spring bulbs are up, bumblebees are humming on sunny afternoons and, as the mountain is dusted with snow, seabirds circle in clear air and the cafes of Salamanca fill with locals enjoying the sunshine. I continue to run the Indonesian education project from a tiny dormer room upstairs in the old cottage, every day we walk the streets – and we are relishing our time back home in Battery Point.

Back to stories
Back to Extraordinary Times
Scroll to top