Our balcony overlooks the small reserve at the southern end of Colville Street, on the edge of Battery Point. From here, in ordinary times, we often chat to locals walking by or provide exploring tourists with information about the area.

In these extraordinary times the weather has been good and, confined to home, we have relaxed on the balcony more often than usual. There are no tourists wandering by, of course, but many locals taking their daily exercise, some people from further afield who choose to walk in our attractive and interesting suburb and also serious runners enjoying the challenge of the steep hill, some of them running up and down several times. Everyone we see is pleased to be outside and happy to say hello.

We are very fortunate to have this small tranquil patch of vegetation at the end of Colville Street and its history is interesting and worth recording. The photograph of the hill was taken in 1948 and when it appeared in the Mercury series “Pictures of our Past” the caption read:

“In those days it was nothing more than a grassy slope and residents were forced to use a sledge to haul supplies and firewood as vehicles could not gain access. The two men with the sledge are Mr D.Parker, left and Mr C.Graves. Mr Parker had spent 22 years trying to get Hobart City Council to surface the slope.” 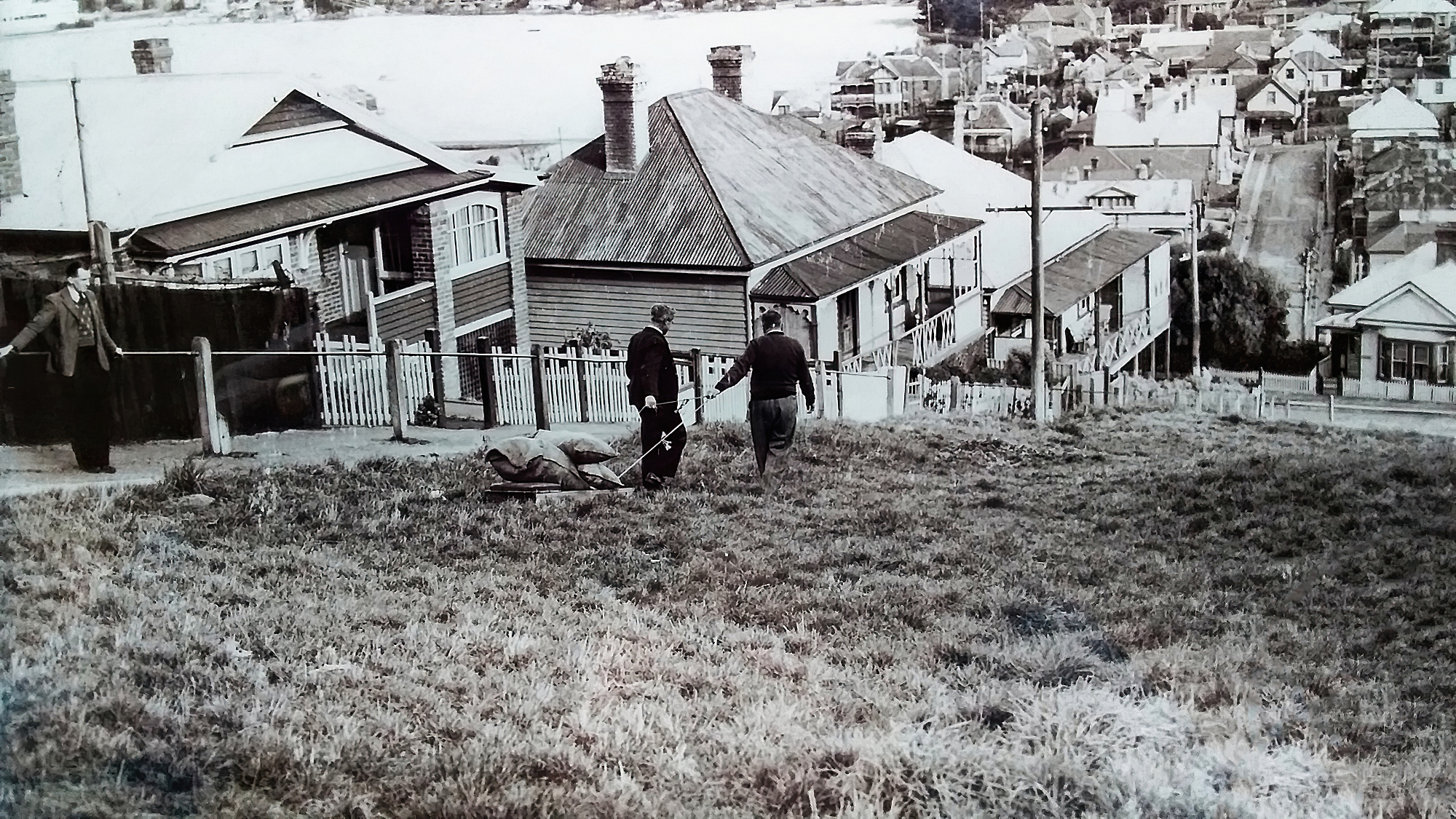 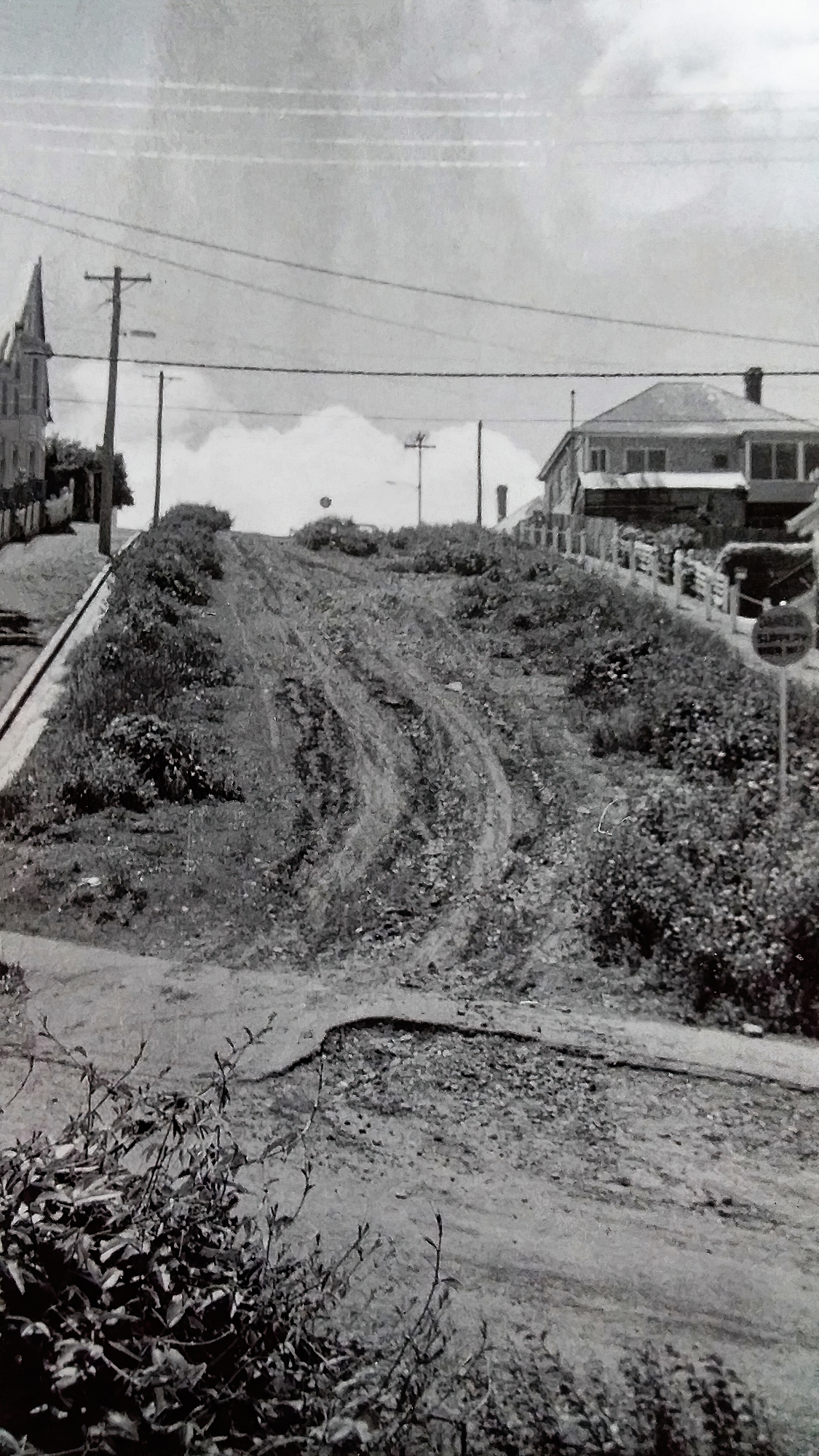 Clearly something changed, hopefully in time for Mr Parker to benefit, because by the 1970s, when the following photograph was taken, vehicles were evidently using the hill as access between St Georges Terrace and Bath Street.

The dreadful state of the road surface at this time plus an accident involving a car, which lost control coming down the hill and ended up in the garden of number 8 Bath Street, resulted in another campaign to HCC. This time the resident of 8 Bath Street, Therese, urged the council to close the hill to traffic, which it did around 1975. Therese then had the foresight to gain permission from HCC to plant out the area and we can thank her for this small patch of vegetation in our community.

Initially HCC gave Therese a miscellany of young plants for “the green”, as it became known, some Australian native plants and some exotic species. Plants included one Risdon Peppermint, a Tasmanian native with a very restricted distribution on Hobart’s Eastern shore, two Agonis trees from WA as well as European species such as Silver Birch. The council planted and mowed the grass while Therese watered and nurtured the young plants.

This collaborative care of the green has continued as some of the original plants died and have been replaced by local residents or, in the case of the Peppermint, by the council. The original Peppermint became so large that the council deemed it unsafe, cut it down and replanted another one that is thriving. Our neighbours established a row of Bottlebrushes to shield the top wall and these attract many Wattlebirds. The Banksia is now large enough to entice the Yellow-tailed Black Cockatoos down from the mountain. A few years ago a group of residents planted a Strawberry Tree in memory of a much-loved neighbour. This Easter a new resident, pleased to have moved close to this lovely green space, raked up the leaves as his daily exercise during lockdown.

We have always enjoyed living so close to this little reserve but we appreciate it especially during these extraordinary times. If you don’t know this part of Battery Point, come for a walk and we may be on our balcony to say hello.