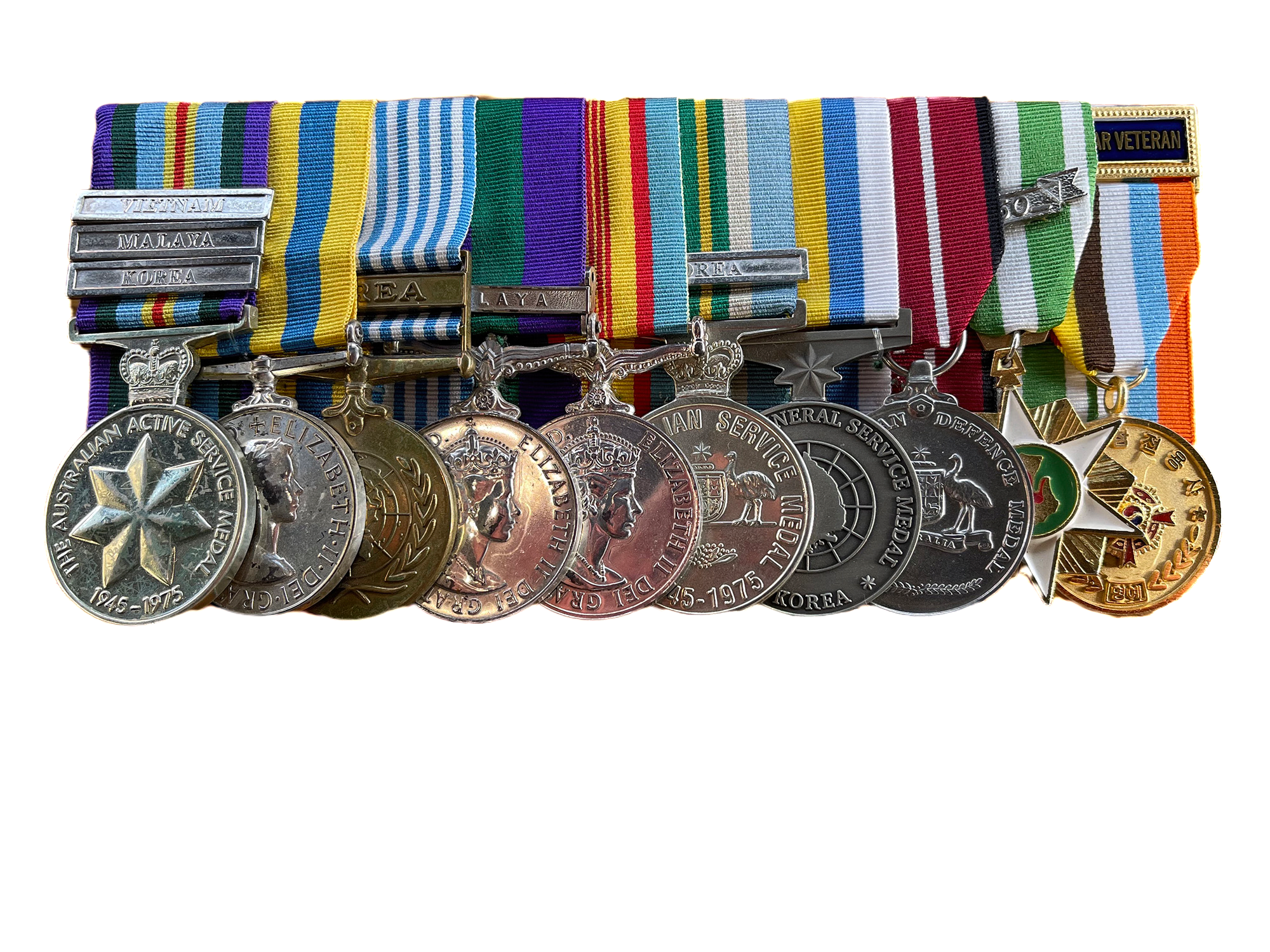 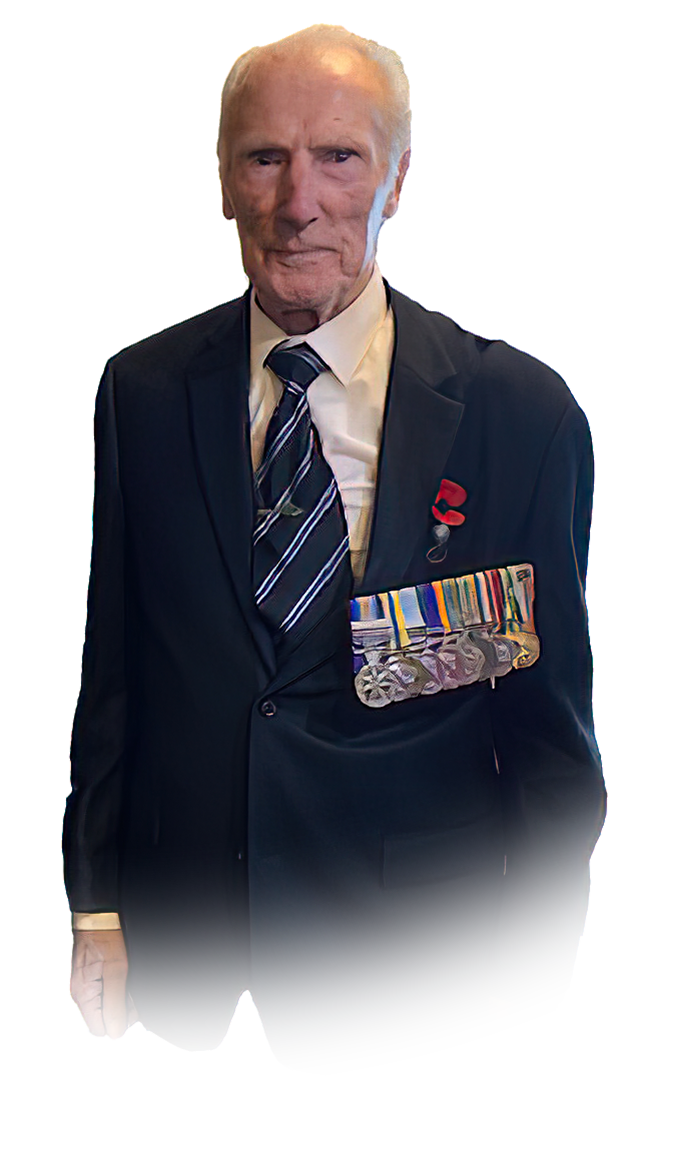 Many Battery Point residents are familiar with the sight of the fit-looking gentleman who can be seen jogging up Sandy Bay Road carrying shopping bags to his home in De Witt Street. What they might not know is that this gentleman is 91-year-old Eddie Westburgh, an Australian war veteran and Tasmania’s most celebrated ultra-marathon runner. Eddie is a physical phenomenon with a resting pulse rate of 45 beats per minute! He has lived in Battery Point for over 40 years and has a fascinating life story.

Eddie was born in Stepney, East London in 1930. One of nine children, he was evacuated during World War Two to Great Barford, a village on the River Great Ouse in Bedfordshire. Eddie spent two years in Great Barford, where he often played in

the garden with the children of the author Barbara Cartland, who was head of St John’s Ambulance at the time. He remembers that there were a lot of Robinsons in Great Barford and, amazingly, caught up with two children from the village during his later war service! Eddie returned to London toward the end of the war where he found work delivering coal to residents. One of his customers was the famous English singer, Vera Lynn. Eddie has strong memories of the terrifying V-1 flying bombs, nicknamed ‘doodlebugs’ sent by the Germans to bomb the city. The sound of the V-1 emitted a rasping noise like a two-stroke motor, which heralded its arrival. When the buzzing stopped, the bomb dropped like a dart to explode in a fireball. Eddie lost neighbours and acquaintances to these lethal weapons.

After the war, Eddie joined the Queens Royal Regiment where he spent 15 months patrolling post-war Germany. He was posted first to Berlin and has strong memories of Spandau Prison in which seven Nazi leaders were held prior to their conviction in the Nuremberg trials. He later transferred to Iserlohn, near Dortmund for the remainder of his service in Germany.

Following this overseas posting, Eddie transferred to the Army parachute regiment in Aldershot. While descending during a jump one day, he noticed a man and a boy struggling to swim to safety in a lock of the nearby Blackwater River. The boy had fallen in while crossing the lock and the man was attempting unsuccessfully to save him. On landing, Eddie discarded his parachute and, to the puzzlement of the officers in charge who were unaware of the emergency, sprinted off to the rescue! Eddie jumped into the lock and calmly escorted the two people to safety. He then climbed out and headed back to do another jump! A police report by the Chief Constable of Essex recorded the episode. 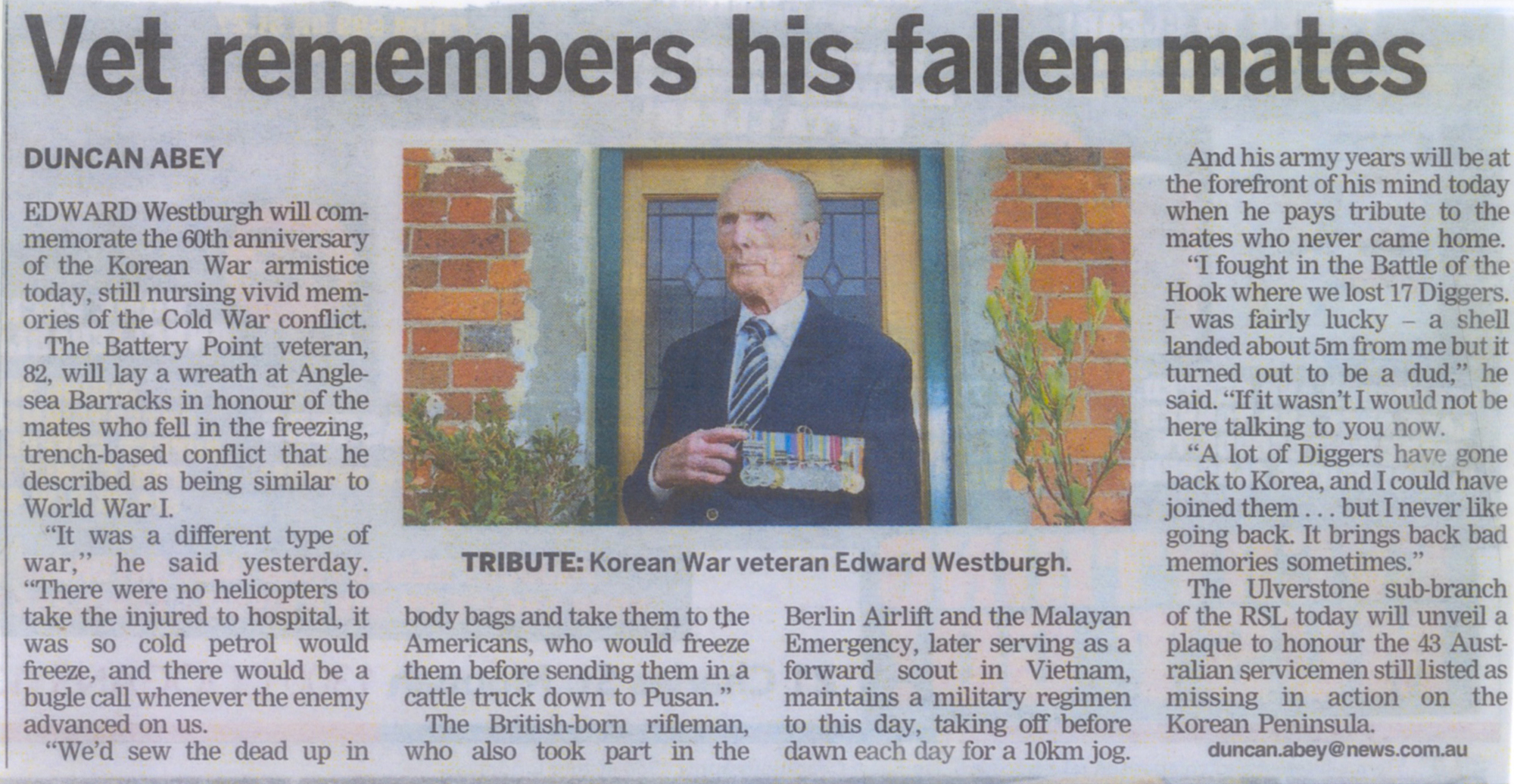 Eddie joined the Australian Regular Army in the UK in 1952 and moved to Australia where he served in a variety of locations from 1952 to 1972. 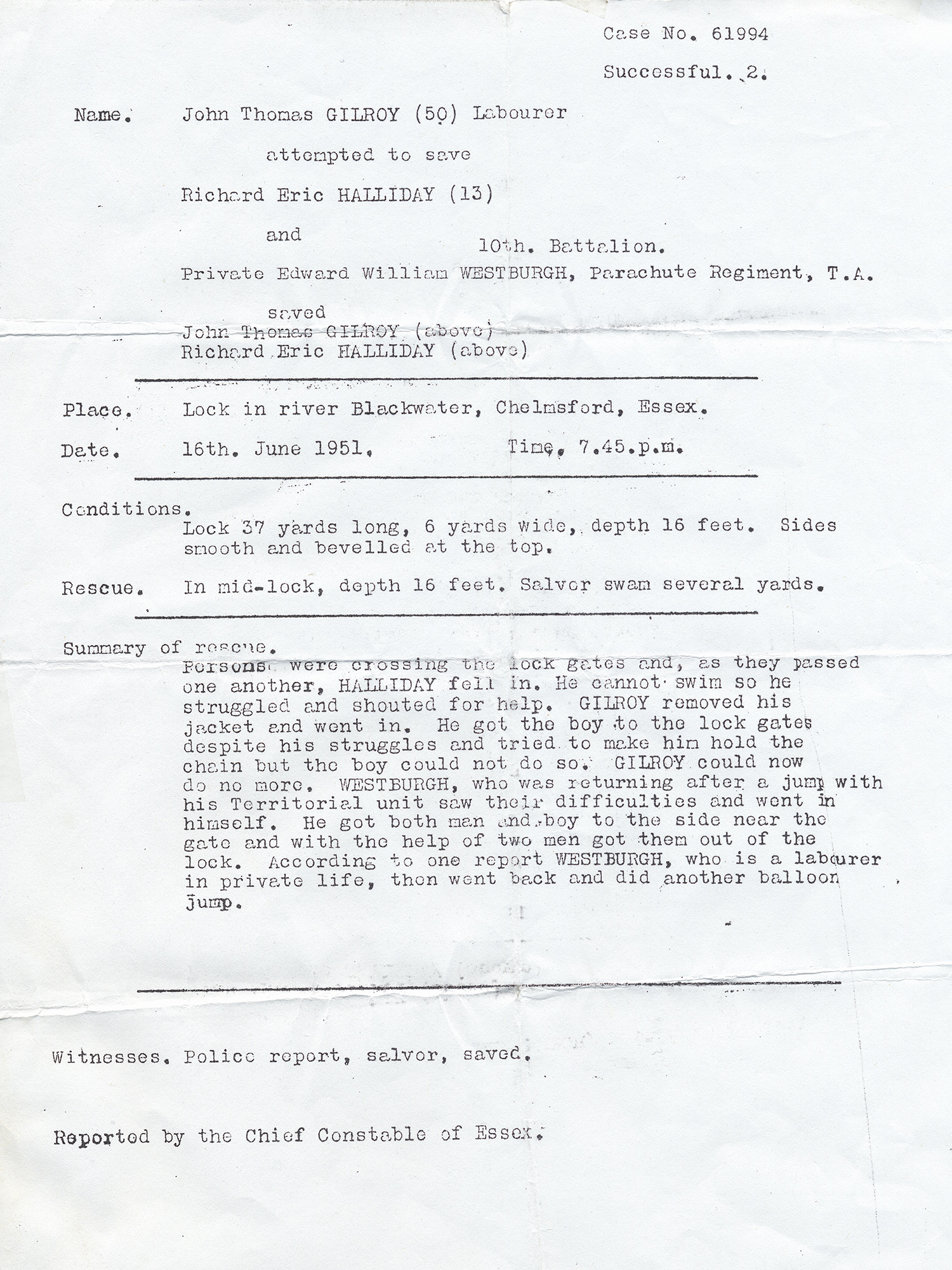 Eddie saw action in Korea, Malaya and Vietnam. He was posted first to Korea as a driver and had responsibility for transporting food to soldiers at the front. During the Battle of the Hook, he remembers a large bomb landing with a loud bang beside him. Fortunately, the bomb was a dud, so he lived to tell the tale! Eddie remembers it being so cold in winter that petrol would freeze in a vehicle, rendering it useless. After Korea, Eddie spent nine months in Malaya but was injured in an accident in which he badly damaged an ulna nerve.

His tour of Vietnam lasted 12 months. Eddie was a driver and forward scout, which was highly dangerous work. In 1969, he remembers walking through a field and noticing brown patches on the ground. Close examination showed that there were mines underneath. Eddie called out to the soldiers

behind him to stop as he crawled on hands and knees through the grass to find another four mines and led his mates to safety. This event happened just as the American astronauts Armstrong, Aldrin and Collins were preparing to fly to the moon.

At the time, Eddie recalls thinking that if he stepped on a mine, he would be likely to beat the astronauts into space! Eddie remembers the Vietnamese as friendly people and that the children knew where all the mines were. One of his jobs was to investigate graveyards where the enemy often hid their weapons under the dead bodies. This was harrowing work. Recently, Eddie began experiencing nightmares in which a corpse would rise up and ask him, “Do you remember me?” When this happened, Eddie would get up and head to the gym. Fortunately, the nightmares have ceased.

The following is the official report of an incident in which Eddie was involved during a patrol in Vietnam:

On approaching a cornfield which lay directly in front of thick undergrowth, we were fired upon by an unknown force. The three forward scouts immediately returned fire. Corporal Ford ordered an immediate sweep through the area where our fire was not acknowledged. On entering the cornfield at approximately the place where the fire originated, we came across a thatched hut. Inside the hut was a rifle later identified as a Springfield 30 calibre, plus two satchels containing documentation of an unknown nature. After an unsuccessful search for the enemy, we were ordered to return to our tank force element which was situated approximately 600 yards north. On reaching our destination, the documentation was handed to the officer in charge. The weapon was taken to the Task Force Maintenance Area by Private Westburgh the following day.

Following active service, Eddie transferred to Tasmania in 1971 and was involved in recruiting young Tasmanians into the army. He has lived in two different houses following his arrival in the state.

A modest man, Eddie proudly wears his military medals at official occasions. He is especially proud

of a photo taken in 2002 with World War One veterans Alec Campbell and Frank McDonald. Alec, Frank and Eddie had a combined age of 300 years! In 2010, Eddie received a letter from the President of the Republic of Korea, thanking him for his ‘selfless sacrifice’ during the Korean War and inviting him to visit the country as part of the Revisit Korea Program. 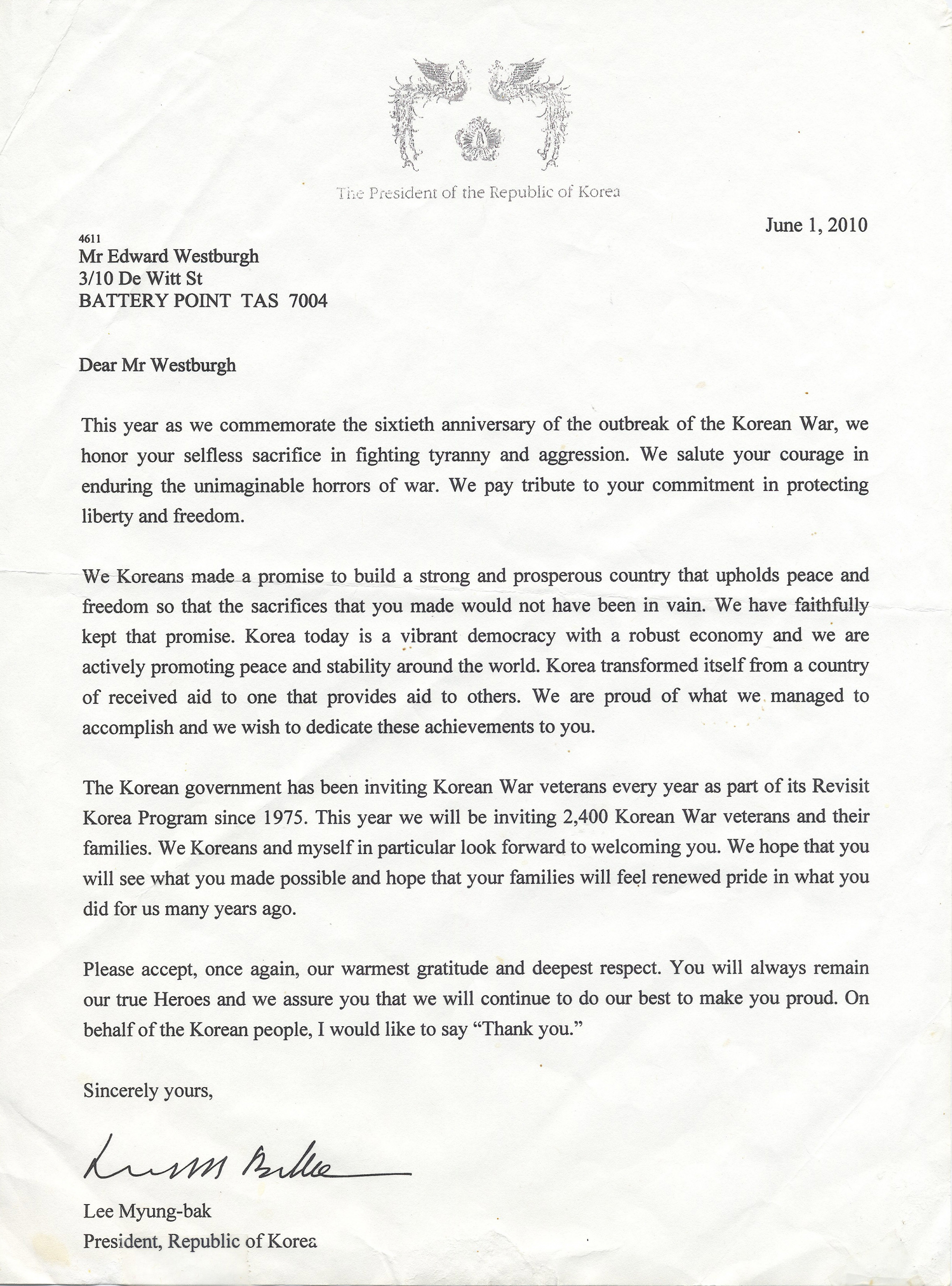 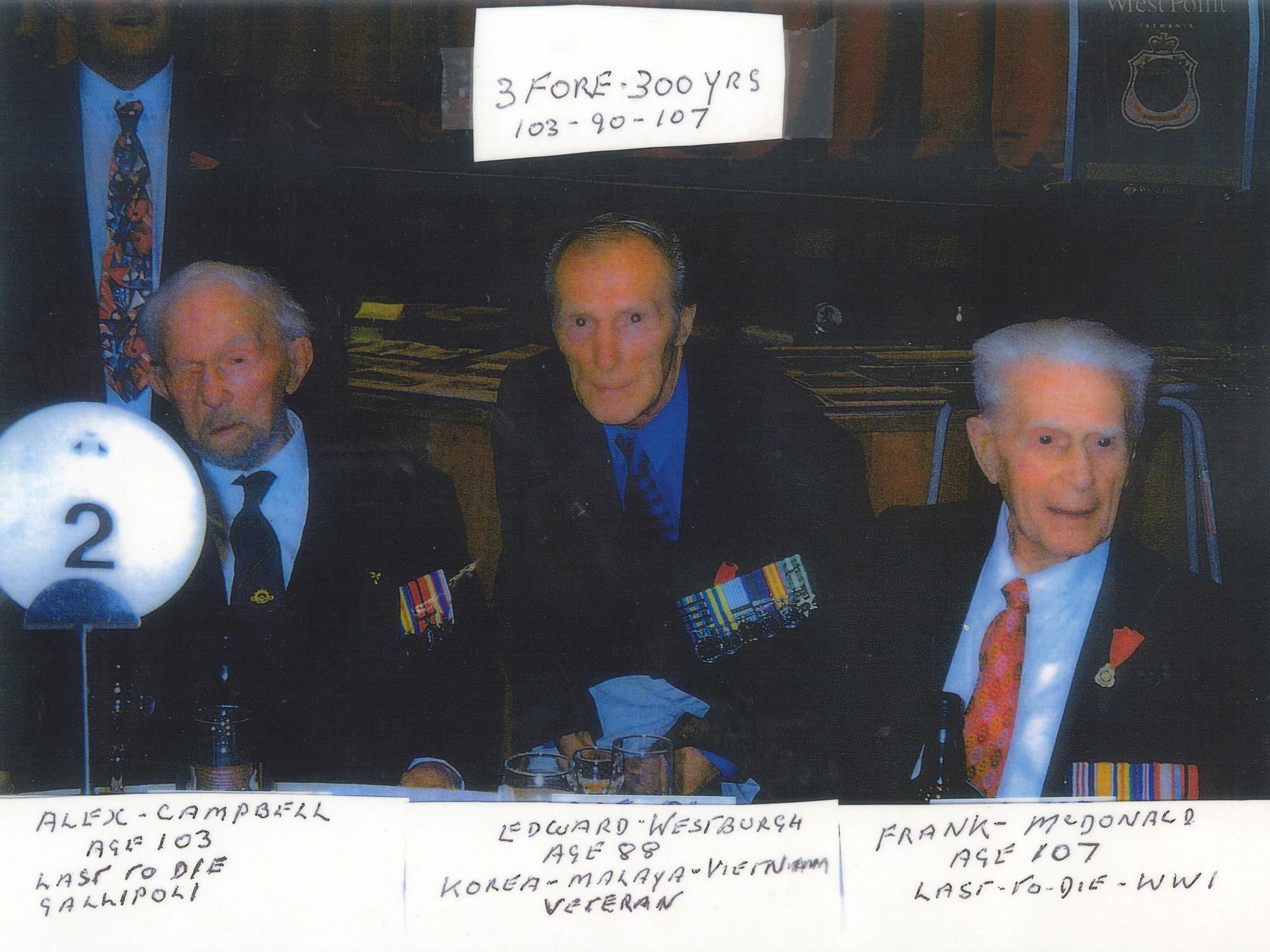 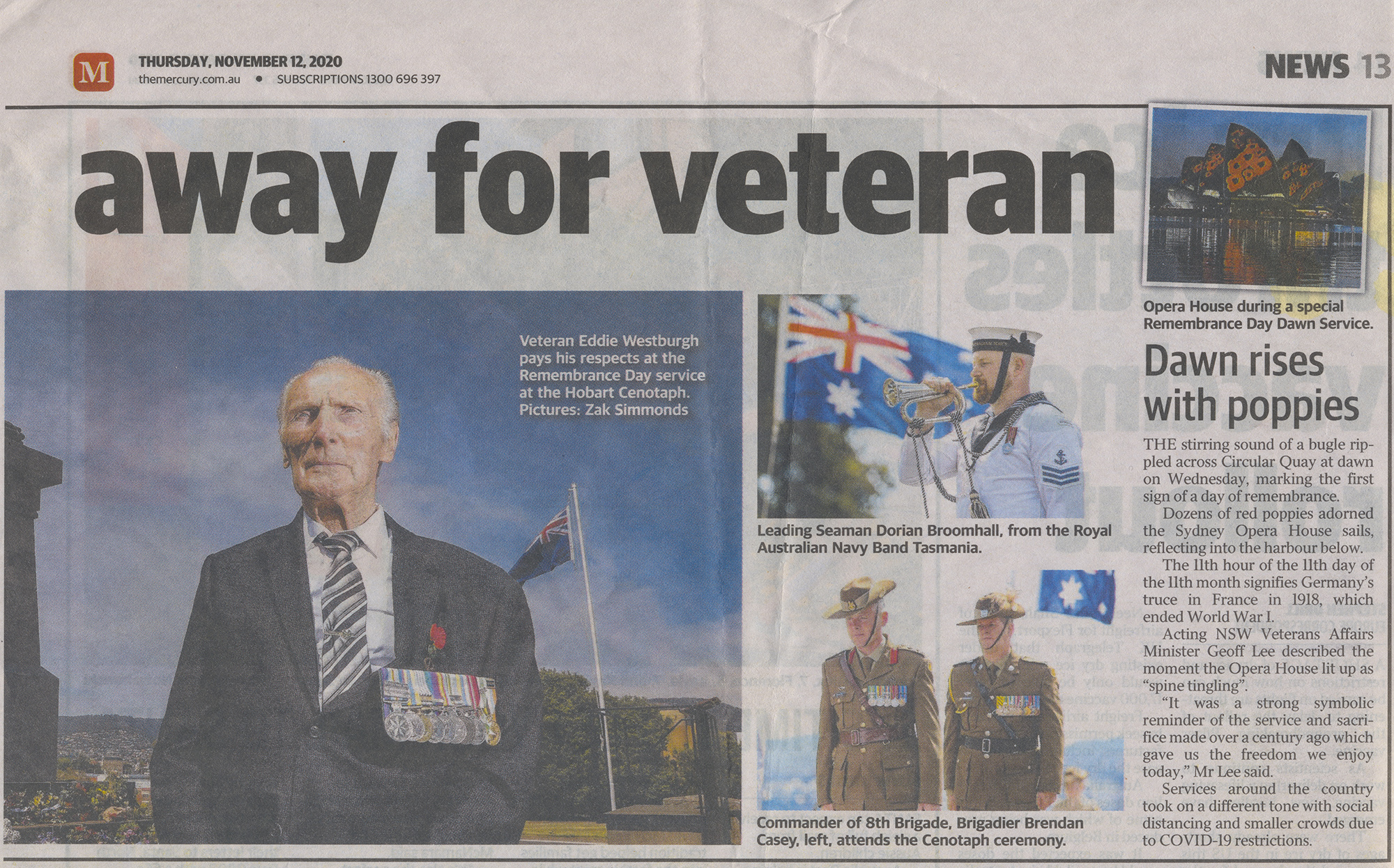 Eddie’s passion for long-distance running began in the army and he quickly demonstrated his skill for the sport. He won a variety of events while in the Army and has won many events since then, including City to Casino, 10 Mile Tasmanian Veteran Run, King of the Mountain, Oatlands to Hobart and Launceston to Hobart races. In 1985, Eddie completed the Melbourne to Colac Ultra Marathon, a distance of 207.2 kilometres, in an astonishing 21 hours, 28 minutes and 20 seconds! In 1986 and 1987, he ran in the gruelling Sydney to Melbourne race, made famous by the shuffling Cliff Young. In 1994, Eddie was a handler for the Greek world ultra-marathon champion Yiannis Kouros during the punishing Telecom Tasmania Run. In 2000, he was honoured by being asked to carry the Olympic Torch on Sandy Bay Road. 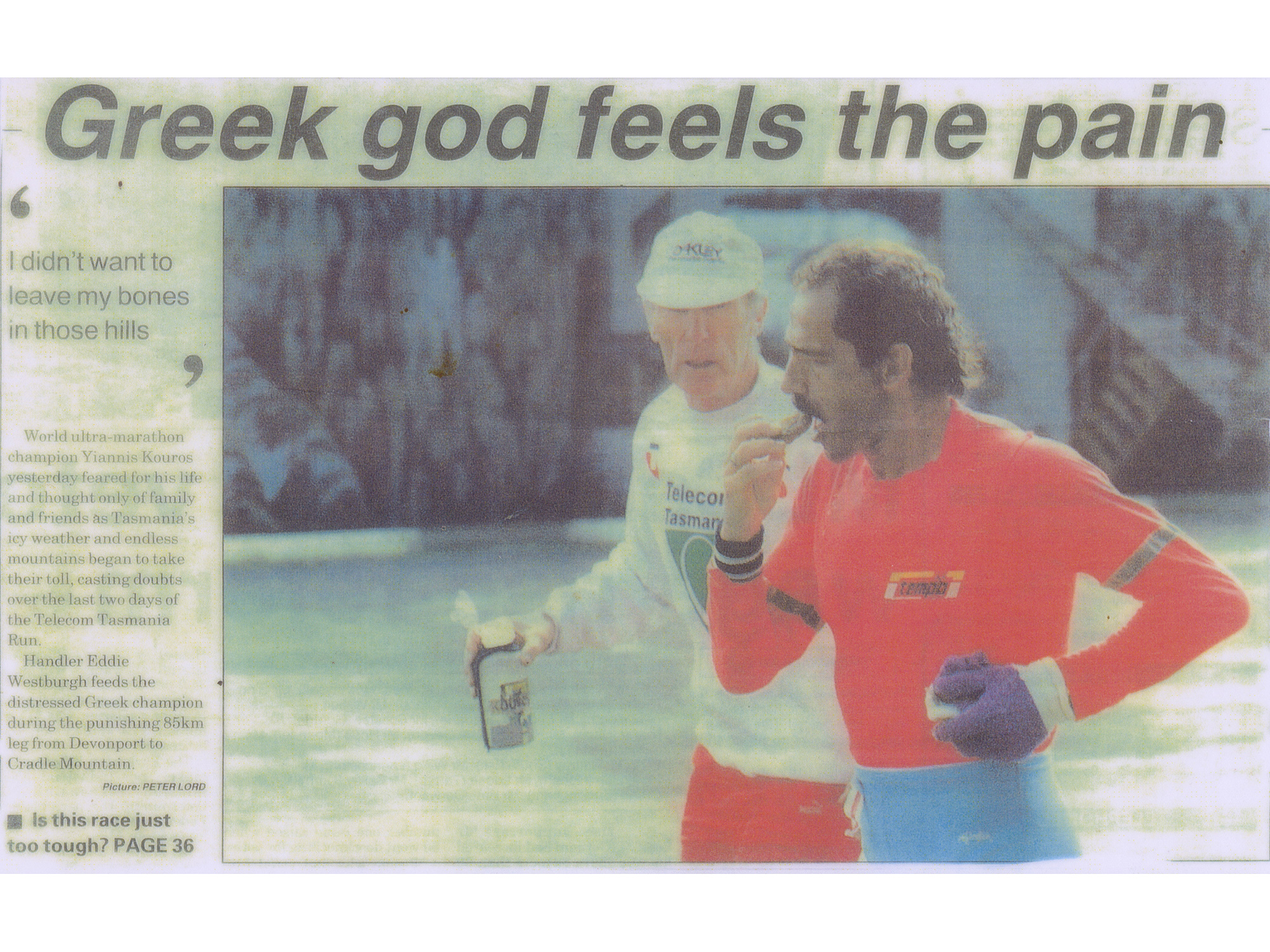 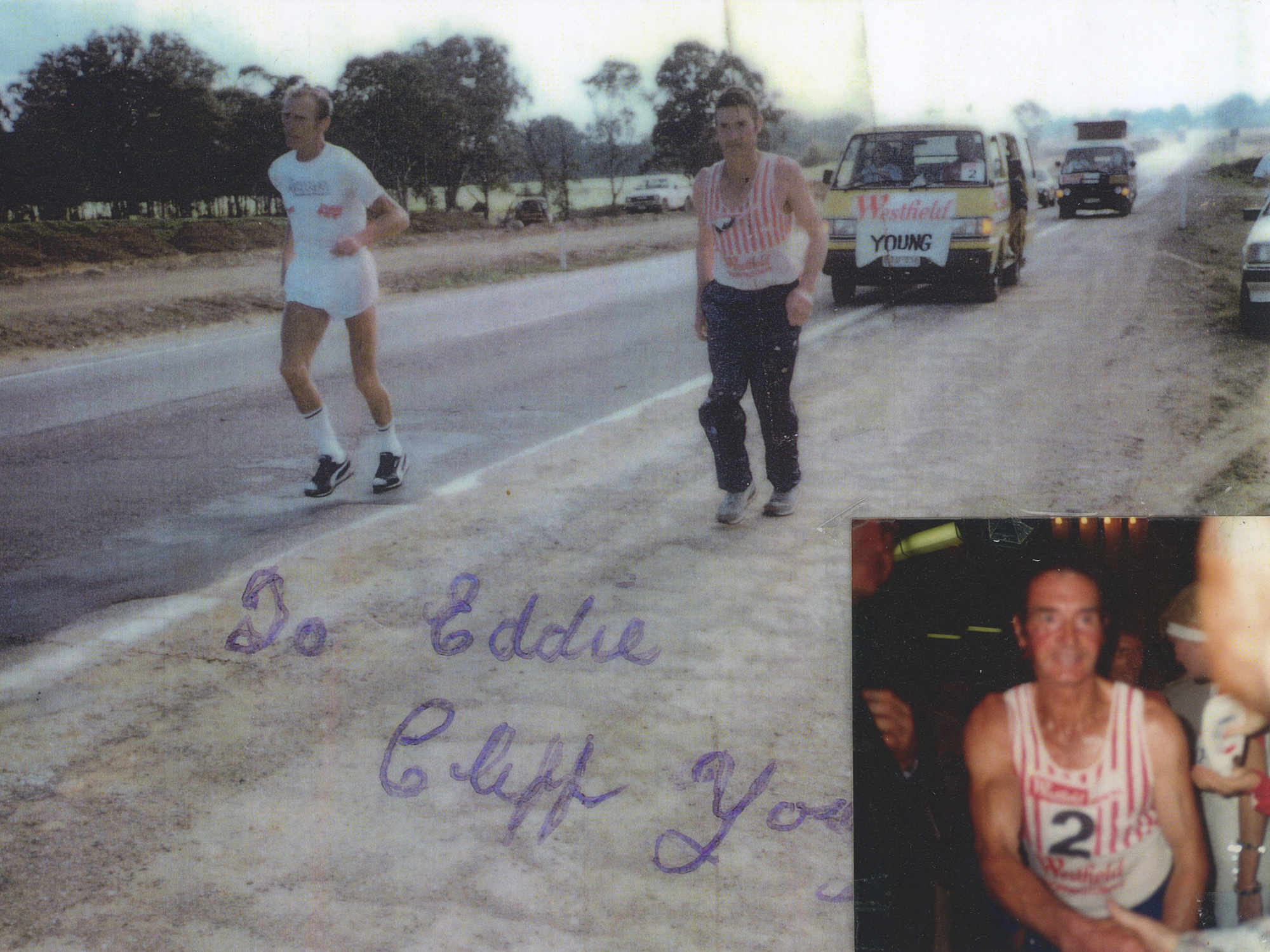 Eddie’s secret for longevity is to stay fit and off the tablets. A key to his success as an ultra-marathon runner has been his insistence on eating well prior to and during a race. On the advice of Yiannis Kouros, he drinks pomegranate and lemon juice daily to ward off the flu. Eddie enjoys living in Battery Point where can walk everywhere he needs to go and has a local gym nearby in which he can work out at 5.00 am five days a week. To retain life balance, he celebrates ‘Red Nose Day’ every Friday at Da Angelo’s and imbibes a glass or two of wine with lunch. He reports that his first visit to this esteemed restaurant was in 1994 and that he greatly appreciates the friendship and support of Angelo. Eddie is a regular attendee at Battery Point Community Association events and always enjoys a friendly chat with local people.

Battery Point residents look forward to many more years of life with Eddie. He is an esteemed community member whose energy and positive outlook are an inspiration to all of us.

PreviousNext
1234
Back to stories
Antique Memories