The following observations about the history of Battery Point are by John White, long-term resident and previous President of the Battery Point Progress Association. Another story by John can be found here.

What passing bells toll for those who die as urban activists!

Adapted from Anthem for Doomed Youth with apologies to Wilfred Owen!

Up to the 1950s, the City of Hobart arguably had the best examples of Georgian sandstone architecture in the Southern Hemisphere, not only in Salamanca Place, but also along Davey Street and Macquarie Street. Unfortunately, much of it has gone, mostly with the approval of the Hobart City Council (HCC) to demolish and, in certain circumstances, without that permission.

Battery Point was overcrowded in the 1950s and considered to be a slum. When complaints were made to the HCC Aldermen about the demolition of certain buildings, the standard reply was, ‘We can’t stop developers. The new owners have the right to develop their land.’

The HCC did not ask the State Government for the ‘power’ to protect the early European built heritage of Tasmania and seemed to have no wish to do so. The HCC was more concerned with the increase in rates that would flow from the demolition of heritage homes and the increased value of the new developments. There was little interest in preserving, enhancing and restoring old buildings, including the substantial structures that were situated along Davey Street and Macquarie Street as well as the more modest workmen’s cottages that were in Montpelier Retreat and in Battery Point.

One of the HCC’s early town planners recommended bringing vehicular traffic into Hobart along Davey Street, through Castray Esplanade and up Runnymede Street. Half of Arthur Circus would be demolished and a new road would join up with a widened Colville Street. Traffic would proceed down the hill and along Marieville Esplanade before joining Sandy Bay Road at the Derwent Sailing Squadron. The demolition of the old Prince of Wales Hotel, owned by the Cascade Brewery, was the forerunner of this proposal, as was the area between Kelly Street and South Street, also listed for demolition. The site was proposed to be used for a supermarket, a car park and high-rise buildings like Empress Towers to emulate Potts Point in Sydney.

In 1960, the sandstone Georgian warehouses in Salamanca Place were due be demolished as ‘dilapidated rat infested hovels’. This led to the development of a Battery Point Plan to save buildings of interest. Unfortunately, many cottages and shops in Montpelier Retreat were demolished after the developers got into the area. They took away the doors and any other items of value such as Huon Pine skirting boards, and left the houses to disintegrate. Some were actually burnt and the locals were blamed.

Narryna, now belonging to the Tasmanian Museum and Art Gallery, is a fine example of a Georgian sandstone building. Avon Court on Secheron Road was a twin of Narryna. It had stables, a small kitchen garden and fruit trees that fronted onto Colville Street. The new owners applied to the HCC to demolish the buildings and construct flats. The response from the Aldermen was definitive: there was no way they could stop the demolition and the rate increases from the units to be built there could benefit the Hobart City Council. The Battery Point Progress Association (BPPA) (now the Battery Point Community Association) lobbied the HCC and when that proved useless, they lobbied the State Government. Lobbyists included A J White, Major Mayhead (retired from the Australian Defence Force, lived on Secheron Road, was very conservative and known as the ‘Red Major’) and the writer, John White. Unfortunately, their efforts were unsuccessful. Avon Court was demolished and units were completed in 1975.

The BPPA authorised the trio to lobby the state government for ‘Battery Point Protection Legislation’ and a Bill to this effect was passed in the Lower House.
When the Bill reached the Legislative Council, the HCC lobbied the Upper House against the idea and had the Bill adjourned by William Clark Hodgman (grandfather of Tasmanian Premier Will Hodgman). As a result, the ‘second green ban in the nation’ was proposed for Battery Point and Salamanca Place in an attempt to stop further demolition. The first ban was in the Rocks Area in Sydney and was put in place by Jack Mundy of the Builders Labourers Federation (BLF). A J White and Major Mayhead lobbied the national conference of the BLF that took place in Hobart and a ban was easily achieved with the trade unions behind the proposal.

Following this decision, the HCC had architects Clarke Gazzard prepare a plan for the preservation of Salamanca and Battery Point. The HCC inherited the authority to ensure that a town plan for Salamanca Place and Battery Point was implemented. This was different from the ‘Protection Bill’, which had planning authority invested in a tribunal.

At the same time, the State Labor Government, led by Premier Bill Neilson, recognised that Salamanca was an important part of the heritage of Hobart and in 1975 purchased the centre of Salamanca Place where the Arts Centre is now situated. Further lobbying of the Nielsen Government by the BPPA resulted in the State Government purchasing the Hunter Street buildings in 1976. The State Government created separate legislation for Sullivans Cove, which removed Salamanca Place and Hunter Street from the area covered by the Battery Point Planning Scheme. In effect, the Battery Point Planning Scheme was imposed on the HCC by the State Labor Government. This did not sit happily with the HCC and some of its planning decisions failed to implement the scheme properly.

Over the years, the BPPA has taken on developers when they have proposed unsuitable developments in the suburb, pursued decision-making in the HCC through the planning process and won most of the planning appeals. Recently, I spoke to a retired HCC planning officer who believed that the HCC had not received enough recognition for what it had done for Battery Point. I found this comment outrageous. In my view, the HCC had been primarily a development authority, not strictly concerned with implementing the Battery Point Planning Scheme and tending to favour the developers. As a result, the BPPA had to fight many Council decisions through the planning process, which in effect had the community (ratepayers) fighting the elected body (representing the ratepayers) rather than requiring the developer to fight for their proposal under the Battery Point Planning Scheme. In my view, the HCC simply had not been doing the job that they promised when the Battery Point Protection Bill was withdrawn from the Upper House, which was to preserve, enhance and protect the built heritage of the second oldest city in Australia.

Due to the lack of competent reform for local government, when the HCC was criticised for not implementing the Battery Point Planning Scheme (its own plan), some Aldermen seemed to resent the criticism because they failed to see the importance of protecting heritage. Some seemed to gain satisfaction from being deliberately obstructive to those in the community who had a voice and expressed it.

If the early planners had had their way, Salamanca Place would not exist now and nor would Battery Point. Now, when tourist ships come to Hobart, many passengers simply walk, appreciate and admire the ‘Point’, especially when they are able to see the front gardens. The original scheme stipulated that front gardens should be on view, but with the HCC making ‘minor amendments’ to the planning scheme, many fences now virtually block out the visitor’s capacity to see the gardens or the Derwent River.

When the Battery Point Planning Scheme first came into operation, the public comment was that the scheme would put a ‘dead man’s hand’ on Battery Point.

In the 1950s and 1960s, when Battery Point was considered a slum and no one wanted to live here, students found cheap houses to rent. There was no Airbnb and the smell of cannabis smoke filled the suburb! Since then, Battery Point has had a massive renewal. Because of its significant heritage values and central location, Battery Point has become a desirable place to live and a wonderful location for locals and visitors to walk and browse for locals and visitors. It has been worth preserving for current and future generations.

The Battery Point Community Association acknowledges the commitment over recent decades of the Hobart City Council and its planners to the preservation of heritage values.

The image associated with this story is a Vida Lahey  painting of Salamanca Place, Hobart 1922 , oil on canvas  42cm x 39cm

Reproduced courtesy of the Tasmanian Museum and Art Gallery 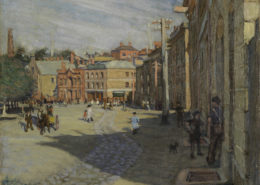 Back to stories
Autumn gathering 2018